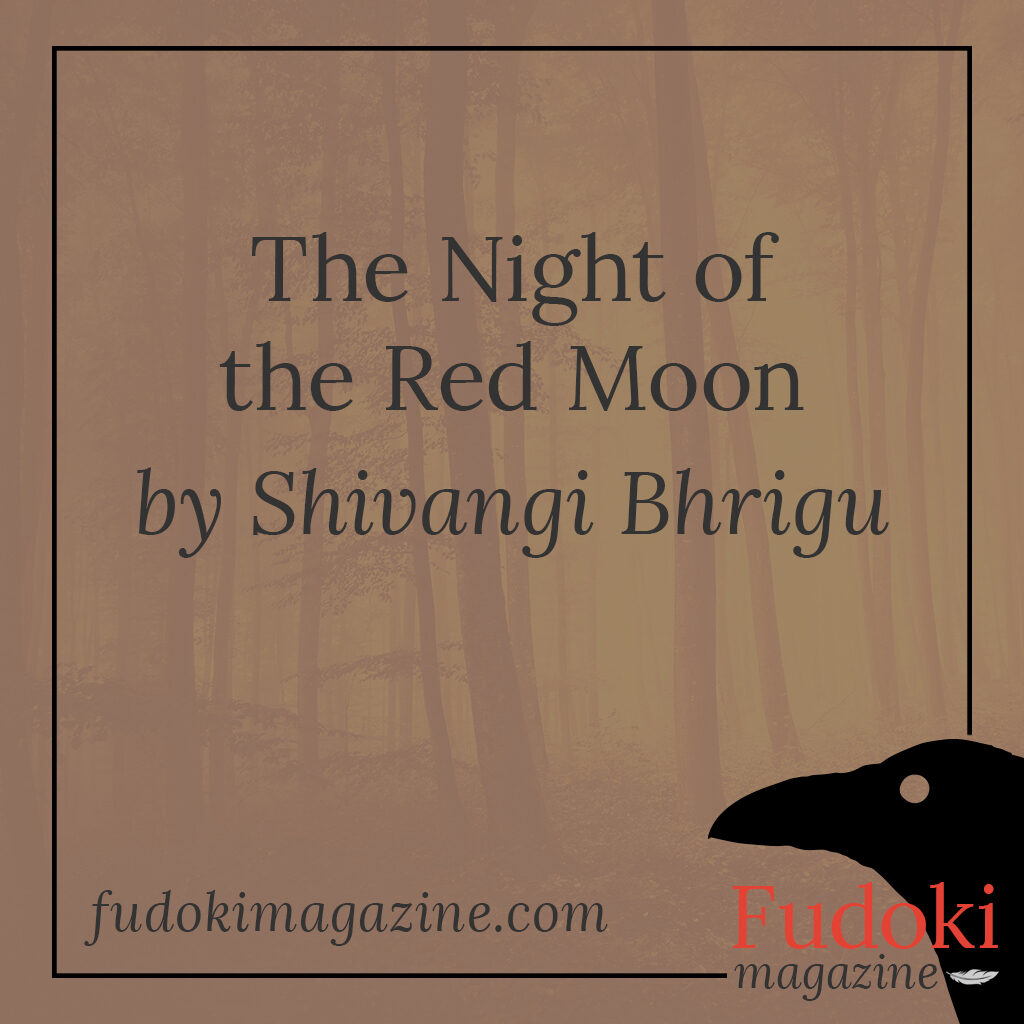 The fog rolled in thick and dizzying, but it took care not to hide away the coppery moon that blazed in the cloudless night sky, not quite full yet, the lower edge blurring ominously into the velvety blackness that surrounded it. The last villagers hasted home and barricaded their doors and windows. Only the brave, or the foolish depending on how you looked at it, remained outside, patrolling the dark streets with their lanterns, either without a care for their families or because they cared a lot.

You see, whenever the moon turned from its usual soothing silver to a curious shade of blood, somebody in the village died.

No, it was no natural death that stole them, but a blood-curdling, gruesome death that must have been agonizing for the bearer of it. It was clear enough from the expressions on the faces of the dead once their corpses were found the following morning. But the states they were found in screamed it as well. Throats ripped out. Viscera spilled onto the ground. Bodies drained of their blood.

As much as was possible, the families of the dead were not allowed to see. Only those who had the stomach for it prepared the bodies for the final rites. Surprisingly to the men of the village, it was the women who took on the task, washing and mending the torn bodies as best as they could and with only the slightest revulsion. The ‘brave’ men who stood guard on those nights fainted or became sick at the sight, but the women, so used to seeing blood, were much less afflicted.

Everybody cowered during those nights, wondering sleeplessly, as they shivered despite the swelter the summer sun left behind. Would they be next? Who would be next? And despite the heavy barricading, the patrols, and the caution every person bore, someone still inexplicably disappeared during the night. From the ‘safety’ of their own home.

That was the scariest part.

They would get up to fetch water or to relieve themselves or to check on the other family members. And they would simply disappear to be found later somewhere deep in the forest beyond the village the next morning. There was no commotion, no sign of struggle, nothing. Word spread like fire across grasslands during the summers, when the soil was parched and the greenery arid.

It had to be the work of a ghost. There could be no other explanation. Amulets were blessed and worn, talismans hung up around the village. Visits to the temple increased, prayers became more fevered. And yet. It did nothing to stop the violent murders.

Sitara’s husband paced across their small room, visibly anxious, and his child whimpered with fear in her arms. The boy was not her own son. He was her husband’s son from his previous marriage. Sitara had been married less than a month. Already, she had bruises to hide but she much preferred having them to hide herself, rather than watching the little boy receive them. Her husband was twice her age, twice her size and, currently, in a foul mood.

It was not unusual for him to be so after a day’s work in the fields but the disquiet that the red moon night dragged along seemed to amplify it. It was the first red moon since her wedding, and she wondered how worse he would be in comparison with the other nights.

“Make the kid stop,” he barked, making the two of them jump.

The child burst into tears. When his father started towards them, Sitara had already pushed the boy under the cot, out of the man’s reach, and stood up to shield him, only to be knocked back down with a slap.

“Useless girl!” he kicked her in the chest before she could recover from the first blow and as she sputtered from the second, she could already see his foot lift again.

But it fell back. He seemed to stagger away from her. Sitara tried to sit up, her sight hazy from the tears and the pain. A noose was wrapped around her husband’s neck and at the other end was a… creature. Human-like. And yet not.

They were shaped like a voluptuous woman with ample breasts and hips and round calves, dressed in rags. Their wild and tangled hair fell to their knees. But in the light of the lantern that illuminated the room, Sitara saw claws the size of tamarinds, fangs that went past their lush lower lip and eyes black like a void. The creature made no sound, no gesture even as Sitara’s husband struggled. They merely stared at Sitara.

And suddenly all the dots connected. The people who had been killed, she remembered who they were, and she realised why their family members had said they had ‘simply disappeared’, why they had said they knew nothing else. She nodded frantically, her body shaking as she rose to her knees and prostrated herself before the creature.

“I have seen nothing, and I will say nothing. I thank you for saving us.”

She heard her husband grunt and then nothing. When she lifted her head off the ground, she was alone in the hut with her stepson. Sobbing, she reached under the cot for the boy and gathered him in her arms. She would have to make a living for the two of them now but that was alright. They would be fine. They were safe now.