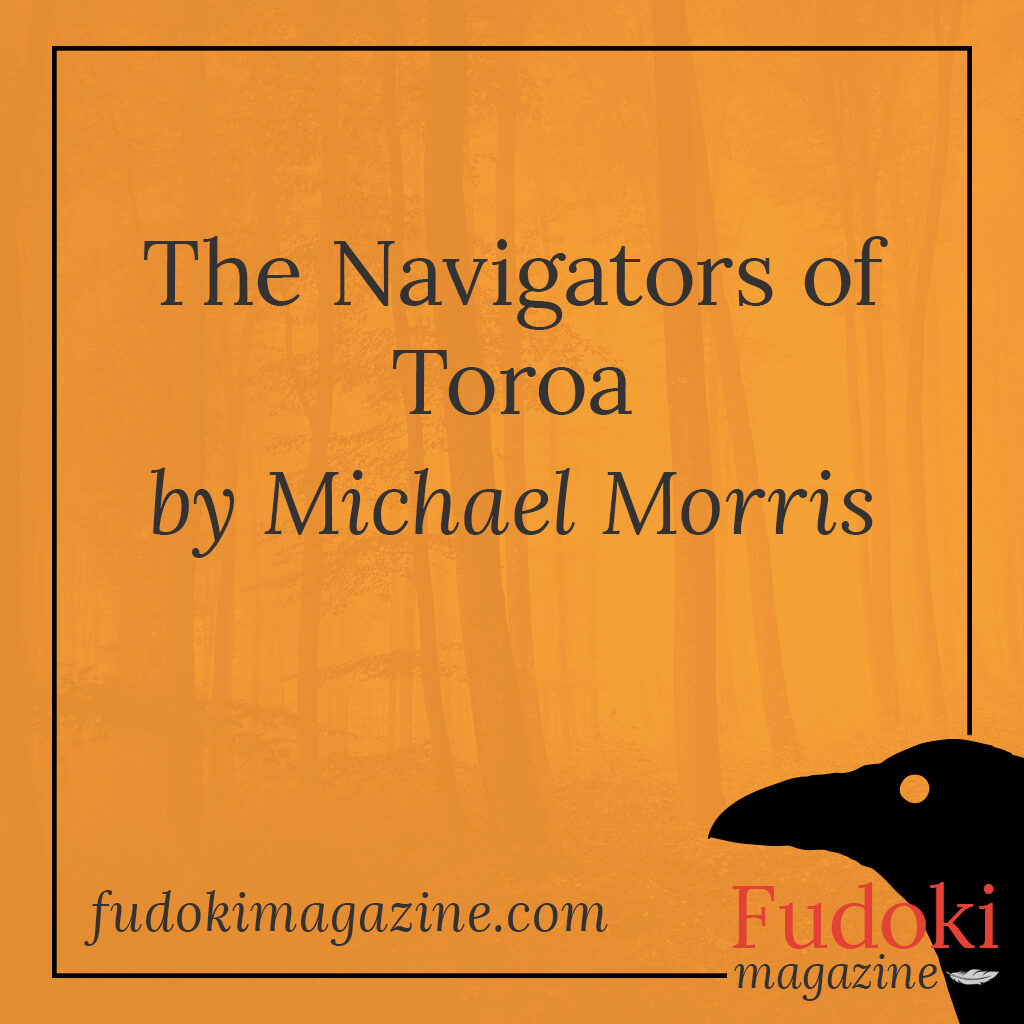 Nobody knows how the Navigators found their way to the island of Toroa; not even them. It is said that the Navigators could cross from one end of the world to the other. They could find land by reading the currents, wind and waves, birds and fish, as well as the sun and the stars. Some said they had magical powers. Others that their powers were within.

The present Navigator, Kope by name, had guided his people to Toroa. Kope made many voyages of trail in his youth, but in old age his life became one of ease. For the island of Toroa was rich and fertile. Upwelling currents, volcanic soil, coconut palms and lush forests ensured prosperity for all.

The people of Toroa were replete and sated. In the manner of such people, their population grew with their appetites. Skirmishes between neighbouring tribes for land and fishing rights escalated into full scale wars. The islanders developed an appetite for grain-fed flesh, and this required felling of the forests. As a result, the fast running rivers ran brown not clear, staining the reefs. Ugly gashes appeared on the bush-covered hills.

Kope gave warning of how this destruction would change the balance of the island. The island would become dry and desolate. The brown stain that oozed through the reefs was choking the kelp forests, starving the fish that the islanders depended on.

Nobody heeded the Navigator. A tribe of seafarers that once would sail an open boat in an ice blizzard now burned wood for heat on summer evenings as they gorged themselves on the fat of the land.

One evening Kope called a meeting of the Tribal Chiefs. Such meetings usually occurred only when the island was in great danger. All chiefs turned up, dressed in their formal feather cloaks. When the ceremonies of challenge and welcome had been exchanged, Kope spoke up. He was holding the staff of his office, a black wooden totem carved with a green swordfish.

“The weather portends a disaster such as we have never seen,” he said. “Less than two moons hence, the earth beneath the waters will crack, fire will roar from the sea bed, and a wave like a thunderbolt will sweep our island clear.

There was silence. Then some tried to argue.

“How shall we survive, old man, if the Earth itself is to be torn asunder,” said one chief, whose territory included rich fishing grounds near the only sizeable estuary on the island. “Perhaps it is time for you to step aside for your apprentice.”

“You speak of what you don’t know,” said Kope. “The Earth will be torn asunder indeed, but it will be several weeks sailing from here.”

“How are we to be safe in our boats,” asked another chief. “Any wave that would swamp our island home would certainly overwhelm even the strongest waka.”

“The wave travels over the deeps,” replied Kope. “Although its power is as immense as the legendary taniwha, if there is a depth of water under the boat, the wave passes under it. The wave does its damage in shallow water as it approaches the land.”

There was some head shaking and muttering. The Earth breathing fire. A wave like a taniwha on land but a lamb on sea. How could such things be? The night was livened by the rhetoric of fierce debate.

But as dawn broke, the debate shifted in favour of the Navigator. He was aided by two wise women, Kura and Kila, who had known Kope as a boy. These women reminded the chiefs of the mana due to Kope for his knowledge and the tradition it represented.

So Kope’s warning was heeded. Supplies were procured, water skins mended, trees hollowed out, and three weeks later a flotilla of rafts and waka, led by Kope, sailed out to look for new land. As tradition demanded, Kope’s swordfish staff was buried under the dunes in the high tide. A new staff would be carved for a new land.

The voyage was a testing time for the flotilla as they sailed with the prevailing wind. Yet thanks to Kope’s skill in detecting storm squalls, schools of flying fish and mats of edible seaweeds, there was not even one death among the people.

Occasionally Kope would guide the islanders to small islets where they could fill their water skins, repair their crafts and rest. But no substantial land masses were found in that vast ocean.

The rigours of the voyage, and the necessity to work together as a team hardened the men, women and children of Toroa. By the fourth year at sea there was no surplus fat on any body, and no surplus spite in any soul.

Kope chanted a special prayer, and muttered to the helmsman in his boat. Kura and Kila noticed the ways the stars seemed to slowly veer around over the next several nights. But the wind remained steady, the waka fleet skimmed along with the wind, and Kope kept his fleet provisioned.

Eventually, land was spotted. A fertile island with lush growth of secondary forest. When the islanders stepped foot on their new land, the ageing Kope was happy to pass his staff of office to his apprentice.

The colony lived on the island for several years, this time in a less profligate manner. After Kope’s spirit was taken to its final resting place, Kura and Kila chanted what they remembered of the Spell of Summoning.

They found what they were looking for. The eye of a cracked wooden swordfish peering at them from a hole in the dunes. They recounted the legends of Te Hau Tapu, the wind of the gods that always blew from behind a waka.

“Shall we tell our men-folk?” Kura asked.

“They don’t need to know,” said Kila. “We are living in peace now. Let’s leave it this way.”

The two women filled in the hole.