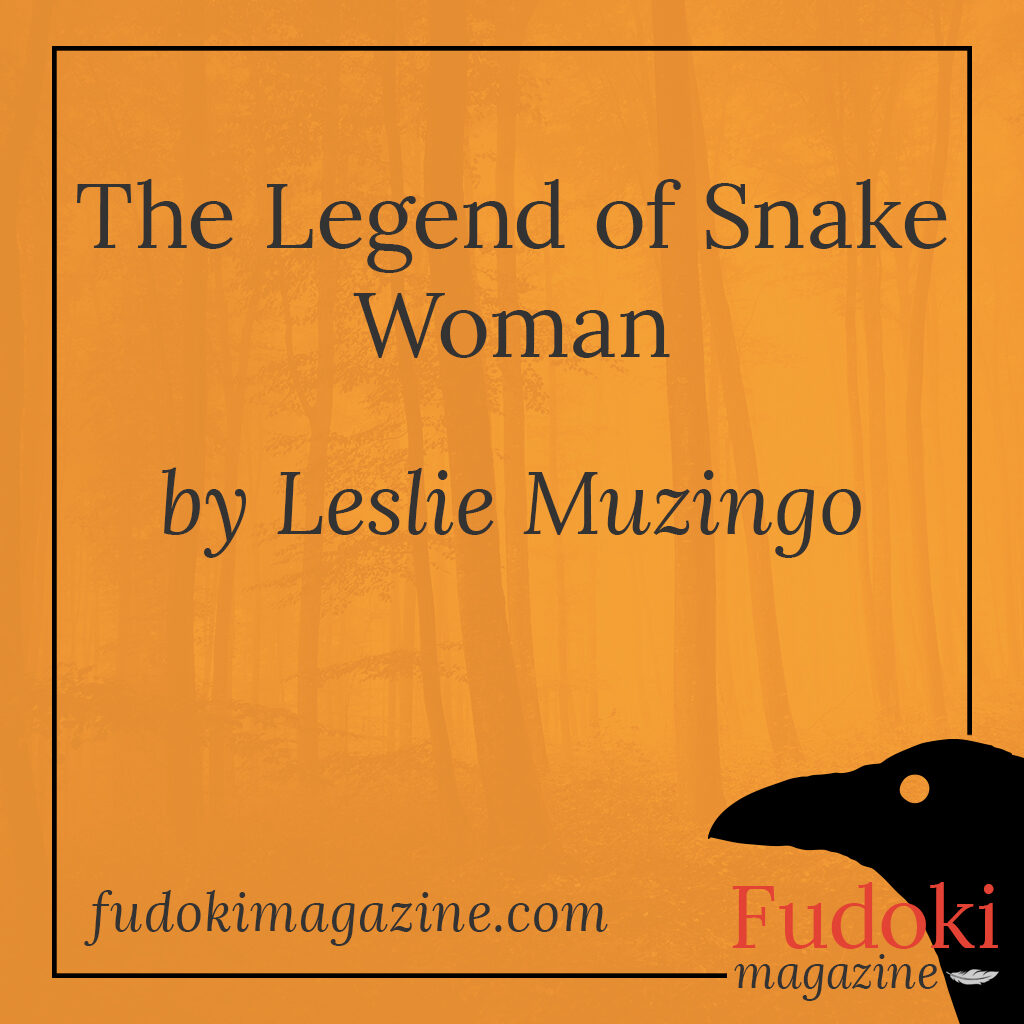 When time began, Great Father gave Snake Woman authority over all growing things. With this power, she grew massive fields of corn and beans and orchards of beautiful fruit. Each harvest she gathered seeds for the following year.  Soon she had more seeds than she could ever use.

Snake Woman shared her seeds with The People who had lived on the land for many years and shown it proper respect.   However, corn, she said, was special to her and required unique care.

Snake Woman sang a lesson-song so The People would know how to care for the corn without making her angry.

“Tend, tend, tend the corn but don’t touch it,
Send, send, send your glances away.
Till ripe it’s mine that corn divine
You will quake from the snake
I will send if you disobey.”

The People tended the corn following Snake Woman’s teachings. They watered it but did not look upon it. They weeded it but never touched the stalks. They taught even their smallest children the rules of the corn, and all obeyed for they feared the vengeance of Snake Woman.

The People patiently waited for harvest. Over the summer the corn had changed colors: brown bottom stalks, green middles, golden tops with brilliant orange tassels like halos waving in the wind. Once the corn was ripe, it became theirs. The People praised Snake Woman as they picked, dried, and ate the wonderful corn.

Then White Man came. The People shared seeds with the newcomers and told them how to behave when growing corn. White Man did as he was told, so Snake Woman was content. Thinking the corn was safe, she decided to take a short nap.

She awoke with a start. What was that noise?  She turned to the Great Father. “How long have I slept?”

Great Father’s eyes were angry, so she did not dare ask why he had not awakened her.

“What is that noise? What causes the smoke?”

Snake Woman listened and heard her corn wailing in a voice no human could hear. The corn cried of how its beautiful tassel hair was being ripped out. “Help us! Help us!” it wailed, to no one, anyone, who might listen.

Snake Woman sent all the snakes in the land—copperheads, cottonmouths, and all varieties of rattlers. Smirking, she waited for the tractors to leave the field and for the torture of her corn to stop.

But no one left. The tractors, blind creatures all, drove over the snakes as if they were not there. Few men even noticed them.  All they said was, “Snakes. Good for keeping rats out of the corn, eh?”

Snake Woman decided to watch and wait for the right moment to strike.

Years later, Snake Woman was surveying her many fields when she heard a commotion happening in an almost ripe acreage.  A teenage girl was tearing through the field, trampling stalks.  A shaggy poodle ran after her.  An angry man yelling foul words followed behind.

“Bite ‘er Jacques!” Snake Woman heard the man cry.  Instead, the dog turned, growled, and bared its teeth at the man.

Snake Woman didn’t care; both man and girl had broken the commandments of the corn.  The fights of humans, even of pet dogs, didn’t interest her.

Just as Snake Woman was about to send the most poisonous rattlers in her arsenal, the man reached out and grabbed the girl. “Now you’ll do what I say!”

That is when Snake Woman noticed the many bruises on the girl’s arms.  Snake Woman hesitated.  In that moment of doubt, a miracle happened: the corn came to the girl’s rescue.

Hundreds of ears pummelled the man on his head, back, and arms. Stalks lassoed him and then tied him up tight. Thick green and gold leaves slapped his face red while tassels flew into his ears to block his hearing.

Jacques, not to be outdone, bit the man’s leg.

Snake Woman heard the girl’s joyous laugh, and she knew the remaining ears of corn in that field were listening, for they crackled with laughter.

The girl petted the dog, “Good boy, Jacques,” she said.

Then, her eyes shining, she turned to the corn. After hugging as much corn as would fit into the span of her arms, she danced up and down the rows. “You have nurtured me like a parent after my mother died and my stepfather,” the girl gestured toward the man lying on the ground with an ear of corn jammed in his mouth, “treated me badly. You have loved me like a daughter, supported me like a friend. I love you so!”

The corn nodded and bowed to the girl. Snake Woman thought that the corn would have kissed her if only it could.

Snake Woman didn’t concern herself about what would happen to the man or the girl. She was overwhelmed with the understanding that someone besides herself could love the corn so much, and that the corn could love them in return.

Great Father brushed away Snake Woman’s tears which fell on the fields like rain.

Snake Woman realized she had held too tightly onto what she had gifted away. Great Father smiled when he saw her face shine with this knowledge, for it was what he had been waiting to see.  Great Father knew then that Snake Woman would care for all nature equally, and he renamed her Mother Nature that day.

Each year thereafter the corn stalks were cut down to nubs making the field look like a knitted sweater. The chopped stalks were worked back into the soil to enrich it and become part of next year’s crop. While the earth, plants, and animals did not always live happily ever after, they were cared for by those who truly loved them.

With Mother Nature’s help, perhaps the world would survive.

Publisher’s note: You can find out more about Snake Woman in ‘Traditions of the Caddo‘ by George Amos Dorsey, 1868-1931. Please read the comments below for more background on the story from the author.