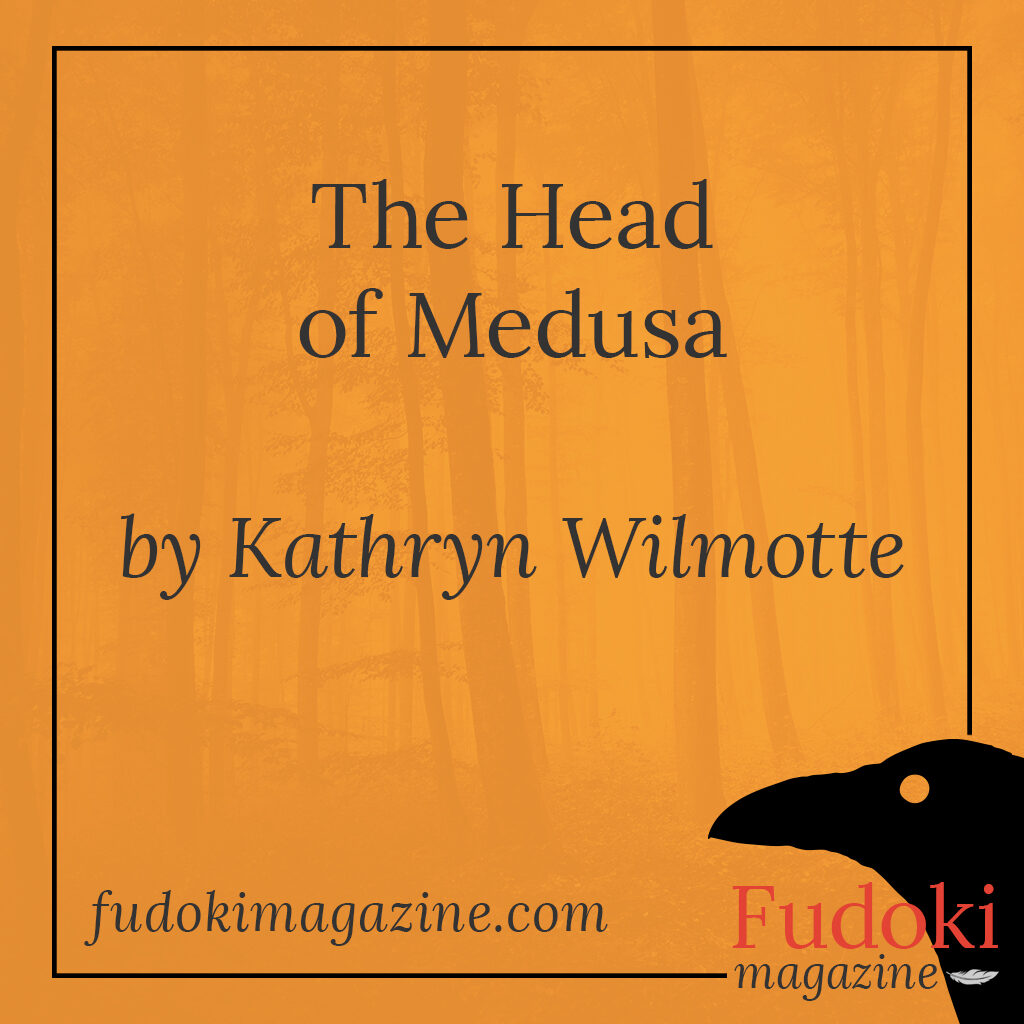 The sea strikes against the rocks, sending up billows of white spray.

The drops strike Perseus’s cheeks and coat his lips with salt. He wipes his mouth and looks out at the bleak coastline. A sheer cliff plunges into ocean depths, bare rock burning under the sun’s fierce eye. A set of empty chains nailed into the cliff-face clank and twist in the breeze.

Perseus is sweating now, his back beginning to peel and blister in the sun.

Why are we here? Medusa’s voice comes from beneath the waves.

Perseus does not answer. He grips a handful of her snakes, anchoring her head to the rock. The serpents twist and writhe in his hand, unhappy at being in the water, though they cannot die. Not a second time.

The head they belong to floats face down, eyes open, turning passing fish into stone.

His gaze remains on the cliff, on the chains. Some of Andromeda’s blood still coats the rock, blood from her shackled wrists and torn back. She has not recovered—she has nightmares and refuses to let her nurse out of her sight. Two months married and he’s not even seen her naked.

When are we going back? Medusa asks as her snakes coil unhappily around Perseus’s arm. Then: Does she know you’re here?

Lying to your wife? She clicks her tongue. Not an auspicious beginning.

“Shut up.” He has no need to speak aloud—she can hear his thoughts as easily as he hears hers, but since they are alone, he speaks aloud.

One of the snakes bites his arm. Its teeth prick like needles.

Again, he goes through the litany of why this connection must be severed. She is a monster, she has the power to turn people to stone, she was punished for a crime. The fact that she can read his thoughts, that some life yet remains in the severed head, is further proof that this must be stopped.

Master. He never heard her true voice—he did not give her the chance—but he thinks this is how she must have sounded: deep and husky, with a slight hissing on the ‘s.’ What will you lose from telling me?

“Fine.” He shifts around, trying to find a more comfortable patch of rock. “I don’t want to be with Andromeda.”

Ah. Not what you expected?

He frowns. He has always been a man of action rather than feeling. Words are difficult. “It’s just…there she was.” He points to the cliff. “They had her chained up. They were going to sacrifice her. She needed to be saved so I saved her. I killed a sea-serpent with only my sword and my wits. And you, of course. It wasn’t hard,” he adds. “I was born to do things like this. To save people from monsters.”

“Then when the suitors attacked us at the wedding… that wasn’t hard either. I’m very good at killing things.” He tries to sound modest, and she laughs.

“Maybe.” He sighs, splashing seawater over his rapidly burning neck. “She’s just…not what I wanted.”

She was chained to a rock, Master. Days hanging in the sun, dying of thirst, waiting for a sea-serpent to come and devour her. How did you expect to find her?

Not everyone faces life as you do. Especially not those who have been made to suffer.

Her head bobs up and down in the water, always threatening to roll over. “Keep your eyes away from me.”

I’ve heard her cries in the night, Medusa says.

“That’s all she does. Cries and calls for her nurse.”

“Two months! Is that not enough time?”

For some, it is a lifetime.

Perseus remembers then. Before she was this, she was a woman too. “You still remember it?”

Yes. Especially when I am in the sea.

He swallows. He’s told himself a thousand times that she is a monster, that her death was good for the world. But every time she tells the story of the temple, of the god, he grows uncomfortable. No matter how he tries to defend his uncle, he cannot help but think that they were wrong, all of them, to do as they did to her. And he shares the blame.

I’ve won you many battles.

His silence is sullen.

A hero’s life should be simple, is that it? Kill a monster. Marry a princess. Bask in glory.

Finally, someone who understands.

Ah, but Master…anyone can kill a monster.

As usual, her words confuse him. “I just don’t want her nurse in our room,” he says after a moment.

Have you never thought that perhaps she fears you too?

He is so startled that he releases his grip on the snakes. He lunges forward, falling off the rock and into the sea. Medusa laughs, the sound echoing under the water.

He scoops her to his chest and swims, careful to keep his gaze fixed on the cliff. Back on the rock, he whistles three short notes.

As they wait for Pegasus, he grips the dripping head. “I’ll…I’ll try to be more patient.”

The winged horse alights on the rock, snorting and whiffling, and Perseus drops Medusa’s head into his saddlebag. His mind is full of restless thoughts, but as Pegasus leaps into the air, the wind blows them away.

“Thank you,” he says finally as they touch down in the palace courtyard.

Of course, my master. I will always be with you.

2 thoughts on
“The Head of Medusa”