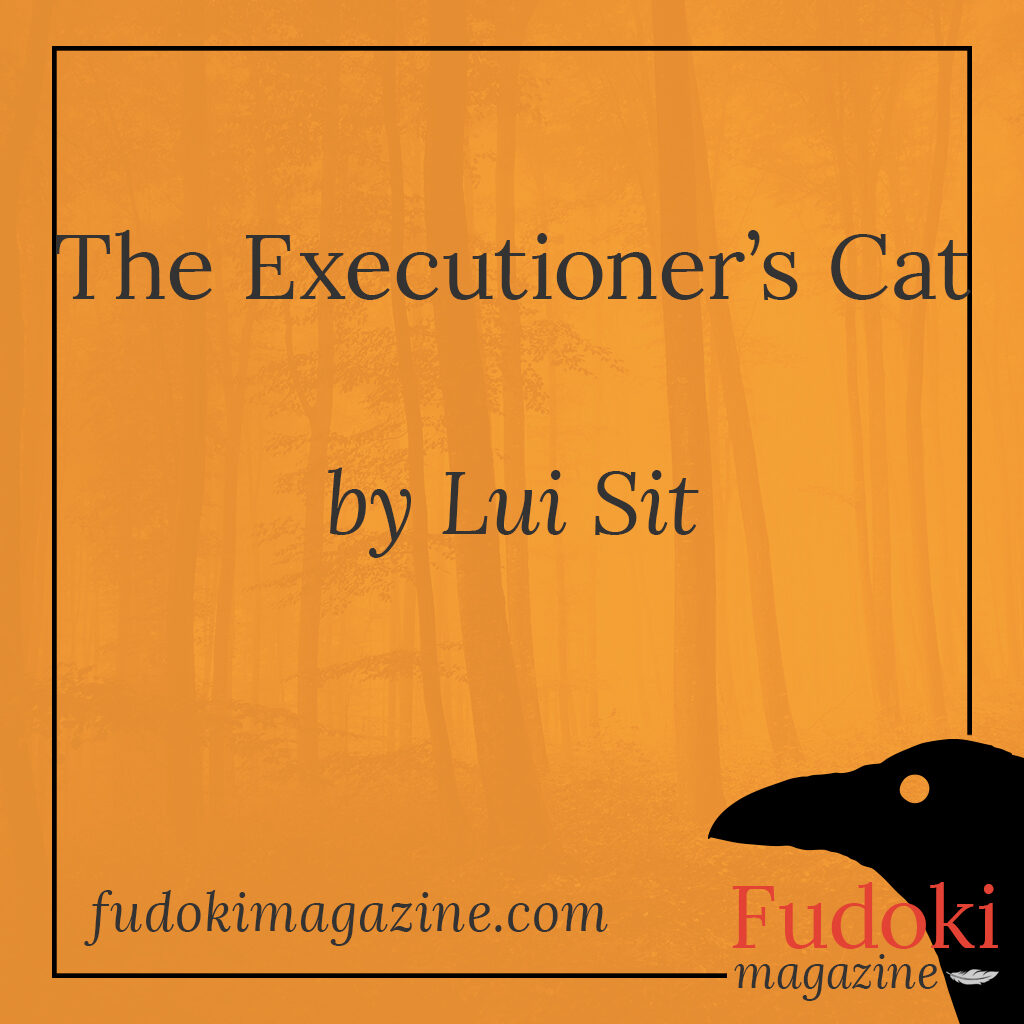 The air was acrid and thick with smoke but long accustomed to the ritual fires burnt at each execution, her eyes did not blink. The bare neck below her belonged to a young woman from the neighbouring village, barely come of age, now trussed and bound on her knees, found guilty of adultery with the village mayor.

She could feel the weight of the crowd pressing on her, their jaws quivering with anticipation, their eyes fixed as one as she stood, feet apart, the wooden handle of the axe smooth in her grasp. Her thick calves clad in brown knotted weave resembled the grove of ancient oak trees in the distance, away from the razed clearing where her work was done. The beams of the platform where she stood were of those oaks, as the woman before her was of the village gathered behind the lit fires, the only barrier keeping them at distance, not pressing forward, baying for blood.

She raised her masked gaze, taking in the blur of villagers veiled by smoke and flame, the bile rising up as she digested their communal hunger for beheading, her disgust as sharp as her blade. Three years she had been the executioner and still, she could not fathom the fervour for public humiliation. It vexed her the day she first swung the blade as it did now, but as she heard the order being given from the official standing behind, she readied to do her work.

The woman below started trembling, her breath coming in gasps, anticipating the lack of air that was imminent. A pool of liquid appeared from beneath her, spreading in circumference, seeping into the wooden planks. She murmured the words she said to each person, the last phrase they would ever hear as she swung the axe to the familiar angle and height, where gravity helped bring it down, severing tendon, sinew, arteries and bone, completing the orbit initiated.

The familiar gasp from the crowd rung out as the axe hung loose in her hands, a movement in the far-off grove catching her attention. A cat, black and muscular emerged from the trees, trotting towards the crowd, ears pricked forward and tail up high in greeting. It sprung nimbly onto the platform, twining itself between her legs, emitting soft mewling.

Her breath caught as he watched the cat move to the disembodied head, sniffing the fast greying face as if inspecting a bowl of cream. The crowd drifted away, the fires reducing to ember and ash, curlicues of smoke faint now, making her visible when she most wished for protection. The village official had departed as soon as the deed was done and apart from the cat, she was now alone.

Her palms grew slick, the lump in her throat pulsing as she watched the cat play with the bloodied head, rolling, sniffing, licking; a garish contrast, the innocence with which it played, captivating and repulsive. Her chest expanded with the first full breath she allowed herself since, a breath cut short when the cat’s plaintive yowl pierced the air.

The axe slipped from her grasp as her gut lurched, nausea spiralling into vomit, joining the blood and urine soaking the wood. Shuddering, she pried her dry lips open.

‘No.’ The word was immediately lost in the breeze, useless against the death she had wrought.  She sank to her knees, her stature reduced by half, fallen like the great oaks beyond. The cat crawled onto her thighs where it curled, sinewy and warm, its purring resonant, granting a guilty comfort as the realisation took root that she had killed an innocent woman.

For nights she could not sleep, the face of the woman clear in her mind as soon as she closed her eyes. She could not remember when her cat had become her arbiter of justice, only that it had. Its vocalisations post beheading were now remonstrative for her, of an execution that had felled an innocent. These had increased the past season, more victims beneath her blade than criminals, and despite her conviction that she was a neutral arm of the law, the number of ale-filled tankards drunk at the tavern each night increased.

On the seventh night of waking, she tossed in her bed, the cat by the foot, riding her restless movements, indifferent to the sleeplessness that plagued her. At dawn, a brief mercy was granted as her eyes closed, her weariness at rest.

As her chest slumped, the cat stood arching, padding across the bed to look down on her slackened mouth from which a stream of saliva was pooling on the canvas beneath her head. With one paw, it reached out and batted her face, as if toying with trapped vermin, then again, swatting harder this time, claws extended.

The executioner started awake, bleary eyed, face up against the whiskered gaze, an unholy rage erupting as the fury of sleeplessness returned, the roar emerging timid in contrast to the force with which she grabbed the creature by the ruff, flinging it against the hearth stone, after which, it did not move again.

The glare of the sun was cruel against her face as she waited for the order. Her throat was parched, neither having drunk nor eaten since she’d killed her pet. Oblivious to the upturned faces of the gathered villagers, she had not bothered to light the usual fires, wanting instead to be seen, hoping for judgement to salve her conscience. The old man kneeling was pleading, begging for mercy but as the order came, she swung, her blade efficient, the head separated without further strikes needed. Her shoulders sagged, the axe heavy in her hands as a faint crying rose from the planks where she saw the figure of the black cat, staring up at her.