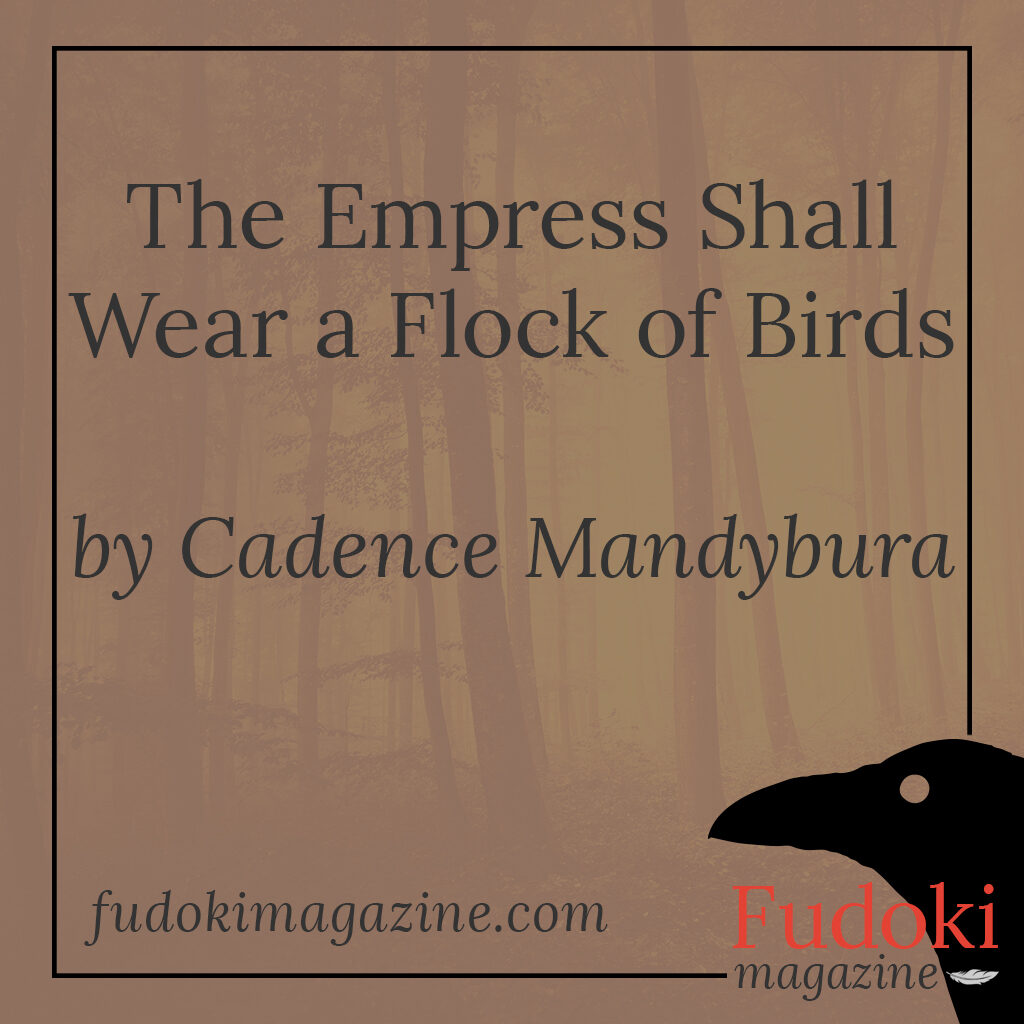 Originally, the couturier’s idea had seemed so lovely: The Empress shall wear a flock of birds! She had adored the concept immediately, and it became the couturier’s job to make it so—no matter the expense.

The first task was selecting the right birds, which was (the couturier admitted) a challenge. The parameters were strict: the birds must be easily bred, clever enough for training, attractive in plumage and voice—and, ideally, their droppings must not be too rank. Also, smaller was better. A cloak of albatrosses, however well behaved, was not the effect Her Imperial Majesty wanted.

Consulting the best ornithologists in the empire at last yielded the prize: the ruby-tipped steelbill, from the antipodean scrublands. Steelbills were tough, clever birds whose beaks could crush tree-nuts and snail shells to reach the meat within. More importantly, the birds were pretty—glossy black with red wing-feathers—and warbled a demure, inoffensive song.

With the birds chosen and their training underway, the tailors tackled the design of the cape: it needed perches and embedded food to encourage the birds to roost. The couturier considered, briefly, the possibility of tying birds into place, but decided that such a measure would spoil the effect. The Empress’s subjects, down to the birds on her cloak, were willing, happy creatures, eager to add their glory to hers.

All told, the task of the Empress’s cloak took twenty-six months, sixteen prototypes, two beheadings, and a noticeable increase in squab in the palace kitchens.

The day finally came for the Empress to wear her cloak of birds. She chose the anniversary of her coronation, the biggest event of the year. Readying for her speech, the couturier and the Empress’s attendants helped fasten the garment, then released the steelbills to feast upon the cape. The Empress laughed in delight and stepped out onto Imperial Dais.

For a while, the effect was exactly as the Empress has envisioned. The subjects massed before her gasped and murmured at the beauty of the birds, their feathers gleaming in the sunlight, their yellow beaks like little points of light. The birds’ song was simple but tuneful, a hundred little throats releasing a carillon as the Empress swirled the cape for effect.

It was about when she started promising prosperity to each and every subject under her rule that things began to go wrong.

One steelbill, having eaten through the feed provided in the cape itself, hopped up onto the Imperial Head. The Empress continued speaking, shooing the bird with a flick of her wrist. The steelbill lifted into a short flight, then landed again on the nape of Imperial Neck. The Empress tried to bat the bird away a second time, but now there were two, three, half a dozen birds hopping up to her face.

The Empress’s speech sputtered, then broke into a yelp as the birds began tearing out clumps of her hair, sometimes with little rags of scalp attached. And then—very quickly, it seemed to the couturier—the flock of birds abandoned the cloak and aimed instead for the meat within.

Her guards tried to help, but there were too many birds, too fast, too small. The Empress screamed, swatted, and ultimately fell under the dazzling swarm of birds. The crowds, speechless at first, later began to cheer. This was the best spectacle they had seen for years.

Later, too fat to fly, the flock perched happily on a pile of the most expensive clothes in the empire and a criss-cross of bones, picked clean.

And the couturier smiled quietly to himself.

3 thoughts on
“The Empress Shall Wear a Flock of Birds”