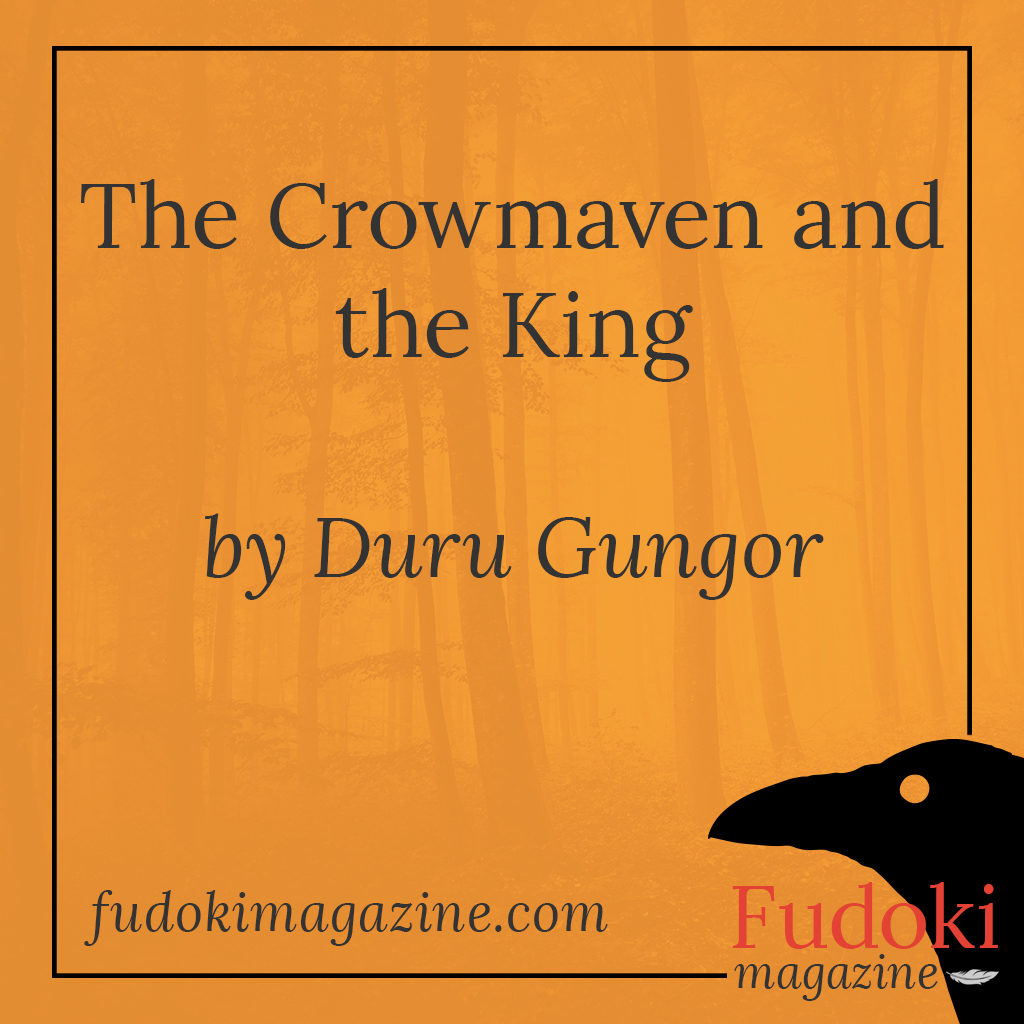 Who, Great King, could ever survive your cold hand smiting? My life, which you took so swiftly, would not even have been worth mentioning, had it not been for this final act—that I am a dead man addressing you this morning. Superstition made your men spit repeatedly as they cut off my four limbs and fed the wet tangle of my guts into a hasty fire by the road. This letter is all the body that remains to me, this letter carries my voice to you who are still King.

The one who brought it to you is a special one. She carried it in her beak; she would not accept anything tied to her leg like a common beast of burden. She placed the little roll upon the windowsill, right next to your hand, twisted her neck to aim one bottomless black eye at you, and departed quietly. In my subtle blood, this is how I see her loyalty. I dearly hope that you looked back at her, My Lord, and that it shall not be beyond you to recognize her, when she returns.

The sun rose a short while ago, and you, I imagine, are a little confounded by these words. After all, it was another kind of bird, with another message, that you were awaiting before the open window of your great hall, flanked by the few councillors who are too serviceable to waste in battle. Rest assured, therefore, that all your preparations bore fruit, your cowardice notwithstanding.

How well you have been able to conceal it. Gifted sycophants proclaimed—even to your conviction—that your greatness ought to be protected, like a pristine stone set in a bezel, by the ring-swords of your steadfast liegemen. Hence it was that you never rode on a white steed to lead those men to battle, never fought like a lion by their side, never crossed blades with foes whose blood you so impetuously swore to drink. Nay, your breed of king stays behind, near a blazing fire, and lets his sons do all the fighting and the dying upon the frozen, crimson mud. Sons so eager to please you, scores of them, entire litters pushed out into the world by screaming bitches without faces. Is it not so, Sire?

Your face, we remember well. My bride had studied it closely when you summoned us to demand my services. Heeding her warning, I declined at once. You swallowed your rage and trebled my charge. You spoke of this battle turning the tide; your need for a peerless, unknown weapon; the terrifying advantage of surprise. You chanted about unfathomable riches that would be mine and my scions’. You lavished upon me lands, serfs, virgins, choicest of livestock. I again declined, so you sent your men to invade my home, slaughter my family, and drag me behind your horses. All of this I had foreseen yet I allowed it to happen; Sire, you know yourself best by what you have, I by what I have not. I have no fear.

Your men tortured me well. They tore out my nails, my teeth, and then—no easy feat with only pliers—entire chunks of my flesh. Finally, they took my most precious possession: my eyes, which were a gift from my bride. Decades ago one night, she had let her blue shadow cross my face and swooped down to pluck out both my eyes. These new ones had come to me in a fine box of onyx, in a dream full of fluttering wings.

Pain was my punishment for refusing you, not a necessity to extract the truth. I let my most guarded secrets pour out of me freely. I gave your men all the recipes, all my drawings, cages upon cages filled with my crows.

They gathered the ingredients at your encampment fifteen days ago. They combined petroleum, liquid pitch and oil of sulphur inside earthen vessels and let them rest in horse manure until today. Before daybreak this morning, they disinterred the vessels and pushed the iron cages of the crows to the front line. The battle tactic was finally disclosed. Some hands must have trembled while massaging the concoction into the heads, the wings and the tails of each crow. The crows must have seemed strangely compliant though irritated by that rough contact.

At dawn, My Lord, just a few moments before you received this letter, in time with the first caresses of the sun over the battleground, your men released the silvery black cloud of the anointed murder toward the enemy. Under my command, they would have flown straight like an arrow. By themselves, they flew straight for a bit and then split into two lines arching backward, aiming for your own warriors. Just then, the heat of the rising sun inflamed the crows, and burning, burning, they fell upon your shrill-shrieking men like dark petals blown from the sun’s bonfire.

Your enemies may be of nobler stock than you are; they may accept your surrender and spare your life. My bride, however, will not. How fitting it is that you could not sense the hidden part of the recipe you so coveted; you never pondered why it is that the crows seek the enemy in their death agony, when they could be flinging themselves madly into the four winds. Why is it that they do my bidding? Like many a cruel man, your judgment is shallow. You saw merely trained beasts in them, and a mere inventor of tools in me. I am the Crowmaven, Sire, and you are King until a fresh candle burns halfway, no more.

Listen closely, and you may hear entire forests stirred by the numbers of my friends. Enough of them to darken the sky. They are on their way even now, almost there, and my bride will start with your vile, worthless eyes.

Author’s note: that this story is inspired by a medieval collection of recipes/strategies for manufacturing incendiary weapons; the collection is entitled “Liber ignium ad comburendos hostes” (“The book of fire to burn down enemies”) and attributed to a certain Marcus Graecus. The idea of weaponizing crows and the particular ingredients listed in my story come from the third recipe in said collection.