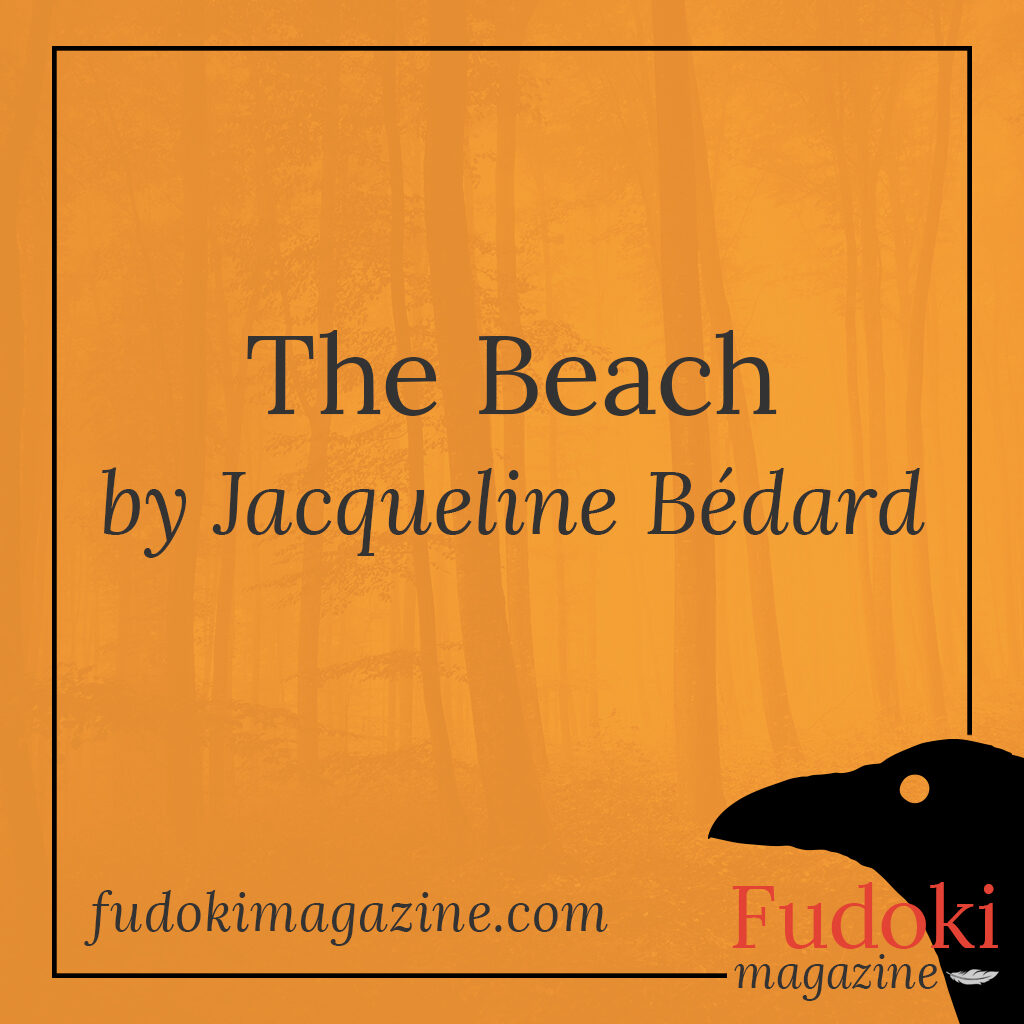 I had come down to the shore early, assuming it would be deserted. I wanted a swim. For weeks it had been all that I thought about, each passing day becoming more aware of the grimy veneer thickening across my skin. It itched. Thousands of small fingers prodding, twisting, pinching. I saw it crawl once, a patch along my arm rolling forwards and back like a wave. And so I stole away to the sea. It had been so long since I last came that I had largely forgotten the path, and spent an extra hour tramping back and forth through the trees and high grasses. They shushed me as I slipped by, cranky that I was disrupting their rest. Tiny puckered faces scolded me under their breath, swaying atop long blades.

At length, I came upon a clearing framed by a stand of thin trees and, beyond that, the rocks. They shone slick and oiled, wet from the tide. When I approached, I saw that they were still breathing, great gleaming backs rising and falling slowly. Small pools of water cupped in their crooks and gashes threatened to overflow, the occasional rivulet dribbling out and disappearing into the sand below.

I closed my eyes, feeling the full damp of the sea against my face, and loosened a corner of skin around my neck. Cool air rushed in under my collarbone and I tugged further. The half-peeled skin hung festively off one side like rancid bunting, and I sighed, savouring it for a moment. The briefest of indulgences.

It was quick work to take off the rest, most of it hardened and raw anyways, almost coming away on its own. The toes and fingers were always tricky, but I managed as best I could. And then it was done. The skin sat heaped in a pile of strange stiff peaks beside me, leftover fluids staining the rocks blackberry. I gathered it up and slipped quietly down to the waves.

When I next looked around I saw the woman. I crouched down deep in the water, letting it fill my nose and mouth. It tasted green and ancient. Kneeling in the rough mix of sand and shale, I watched her progress along the beach. The rocks scratched together under her feet as she stepped carefully around piles of seaweed, long strands squirming slightly, too much life to contain in stillness. Occasionally a frond or two would inch towards her feet or gently ease around her ankles. Yet she merely flicked them away, unconcerned, and carried on picking her way along the water’s edge. I waited until she was out of sight, lost behind an elbow of land. Then, I resumed my washing.

When the skin was finally scrubbed clean I shook out the excess water and laid it down upon dry stones. They filled out the space in a half-hearted sort of way; an older, different kind of bones. I too stretched out on the beach, absently finger-combing through the hair that clung to the scalp in thick ropes.

I didn’t see them coming, the birds. One moment sleepy wavelets were tapping out a soothing rhythm on the beach, the next it was rent apart by screams. They poured out of a rip in the air, three or four of them at least, it was hard to tell at first with all the feathers and beaks. They grabbed at me, leathery hands tipping their wings, shouting in their gravel voices. I let go of the skin and covered my head with my arms, burning all over. Once they lost interest in me, they turned their attention to the empty body and tossed it about. The birds laughed when it tore, while I stayed frozen in place, fearful of moving. My tears leaked into the ground and I prayed that it would absorb the rest of me. Finally, finally, they tired of their game. The skin was lacey with tatters, daylight spilling through long rips and runs. They let it fall, and the air opened again, and again they flew through the breach. The seam shimmered for a moment, a milky scar, before fading completely. Then the sky was as before: white all over, cradling a sickly sun. The moon and stars were there too, almost hidden. Faint bruises curving up just below the surface.

I waited a moment, still raw from the feeling of foreign hands. When at last I rose, the woman was behind me. Her eyes glowed smooth and golden, bright round coins. She pinched the discarded skin delicately with one hand, holding it up for inspection. A weak rain began to fall around us, mixing my tears. I had hated it, that skin. But it had been mine.

The woman replaced it gently on the rocks and took one of my hands in hers.

Don’t worry, she told me. That one wasn’t right for you anyways.

She led me a short distance away to a worn log and we sat, tilting towards one another. Rain pearled her fingernails as she swiftly undid her own skin, expertly sliding out and then folding it neatly between us. She held my gaze the whole time.

Take it, she urged. And then with a shrug: I have more.

The woman turned back to the waves. We watched them crash about frantically for a while, neither of us noticing the thickening rain. I tipped my face to the clouds, tasting the sweetness of this water compared to the sea.

The woman put an arm around my bare shoulders and I let my head rest against her bony neck. She spread the new skin across our laps like a blanket.

Or, she said, we can just wait a while.

Author’s Note: This piece is actually part of a loose collection of stories that could work together, as one larger overarching narrative, or stand alone individually. I imagined them being told as a series of unsettling campfire tales, like myths for a new world. When writing, I tapped into the feeling that accompanies these: the power of words when delivered orally, and the measured pace of a seasoned narrator. The way a fire warms your front while leaving room for chills at your back. I sought to explore moments of uneasy calm nestled snugly in the uncanny valley.