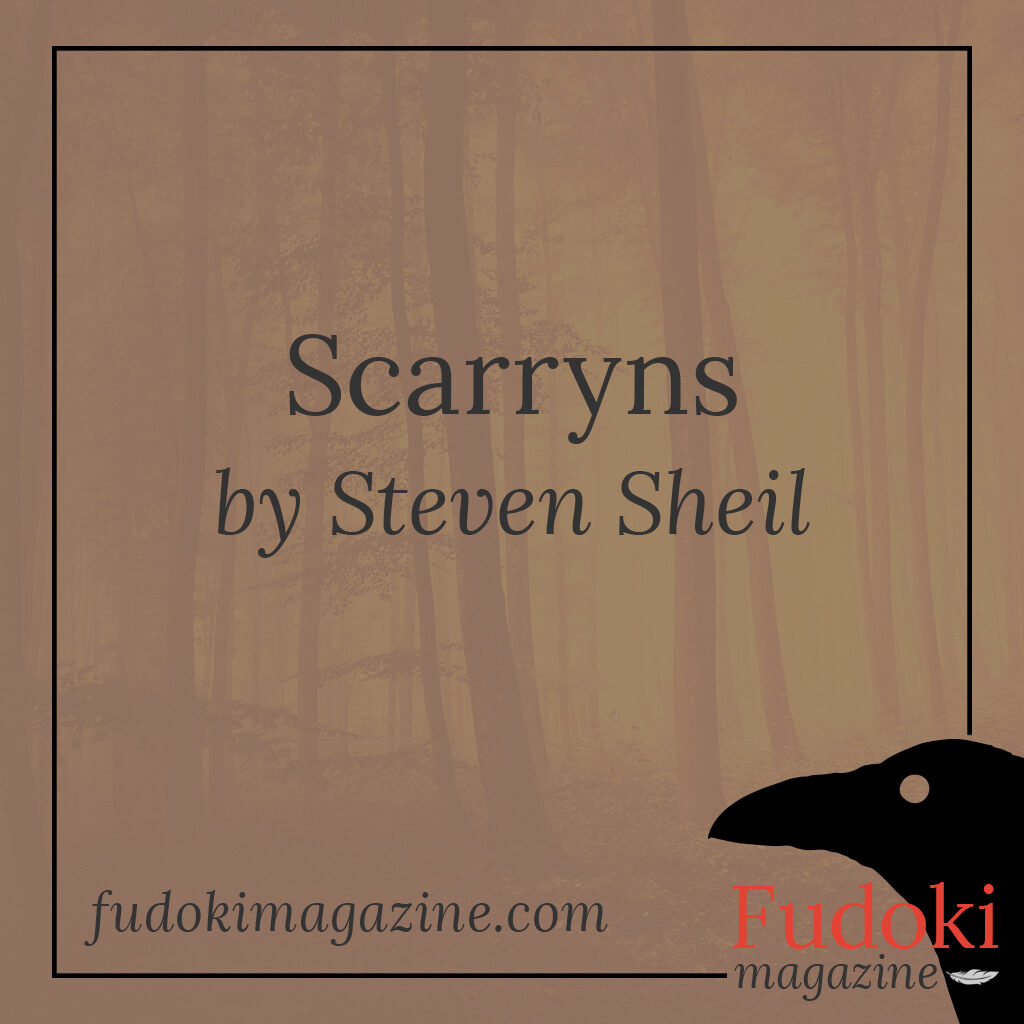 It was a harmless lie, nothing more. The same lie that the old man himself had been told by his own folks, back when  he was the boy’s age. A tale that parents told to keep their children in step, to save themselves the trouble of using the stick or the back of a hand. A harmless, helpful lie, that was all.

“I can see the scarryns on you.”

The first time the old man had told the lie to the boy it had been the night he had arrived, deposited by the smith’s cart on the doorstep of the old man’s farm, a small sack holding his only possessions – a whistle carved by his father and a piece of torn apron his mother had used to hold back her hair. The old man was the boy’s only kin, the boy’s father being the old man’s last surviving son up until the storm two days ago which had sent the oak tree crashing through their roof and killing both father and mother in their sleep. The boy had survived the accident and been found by the smith wandering the lane near the house, wrapped in only the blanket from his bed. He had sent word to the old man that the boy needed a home, and the old man had grudgingly responded. “Bring him.”

The old man didn’t care for children, but an extra set of hands around the farm wouldn’t hurt, he reasoned. But when the boy arrived, the old man could see that he was nothing but a pale wisp of a thing, barely the height of the old man’s waist and with limbs like knotted twine. What’s more, when the old man went to reach for him to show him to his bed, the boy shrunk away and peered up through a furrowed brow as though the old man were some kind of monster.

The old man had crouched down in front of the boy, waved his finger in the boy’s face and said, “Mind, boy. I can see the scarryns on you.”

The boy’s eyes had widened, “Wh – what’s a scarryn?” he’d asked. And the old man had told him, much the same way his own parents had told him – with perhaps a few embellishments of his own. Every time you have a bad thought, he’d told the boy, every time you think about being disobedient or talking back or getting angry, you invite the scarryns in. Tiny, bulbous little creatures, like rats or mice only hairless and round, with pink eyes and sharp claws and pointed teeth. They attach themselves to you while you sleep and then you carry them around with you from that day on.

The boy had looked terrified. “Why can’t I see them?” he’d asked. And the old man had told him how sneaky the scarryns were, how they were too quick to be seen by the human eye, how they scampered and snuck out of sight every time you tried to see them or touch them. But they were there all right, and the only way to stay safe from them was – and at this point he’d fixed the boy with a stern gaze – to never have those thoughts at all.

“Just do what you’re told,” the old man had said, “and you’ll keep the scarryns away.”

The boy had nodded vigorously at that and the old man had given a smile. Good to see the old tale still worked.

And it had, at least for a time. The boy was no ox, that was for certain, but he worked as hard as he was able around the farm, helping with the milking and the sweeping out, and never once complaining even when the broom put thick calluses on his palms. He could cook a fair broth too, once the old man had taught him how he liked it. It wasn’t until the autumn came that things began to turn sour.

One night a storm came, worse than any storm the old man had seen since the boy’s parents had been taken. The old man had forced the boy – despite his clear reluctance and fear – out into the weather to fetch his favourite pail which had been left out by the sty. On his return, wild-eyed and trembling with cold and fright, the boy had thrown the pail onto the stone floor, then taken straight to his bed and pulled the blanket up over him, refusing to even talk to the old man.

“The scarryns are all over you now, boy” the old man had said in fury. But he sensed his tale no longer had the power it once had.

From that day on, the boy did his chores with nothing but a look of sullen hatred on his face. Each night he would go to bed and pull the covers tight over his head, refusing to even look at the old man. He began to lose his appetite too, barely eating or drinking anything, growing ever more wan and listless.

Finally one morning the boy failed to rise when the old man called. The old man at first feared the worst – that the boy had sickened and died in the night. But when he went to look at the boy, he found the blanket moving and writhing as though the boy were in some kind of anguished spasm.

“What is it, boy? What ails you?” the old man cried out. But no answer came. Then slowly, as though weighed down by some terrible burden, the boy sat up in his bed. As he did so, the blanket fell away and the old man saw the hatred and defiance in the boy’s eyes. And the creatures that clustered around the boy’s shoulders and neck gave a high-pitched shriek in unison, detached their claws from his pale skin and swarmed from his body, skittering across the stone floor, pink eyes fixed on the terrified face of the old man.