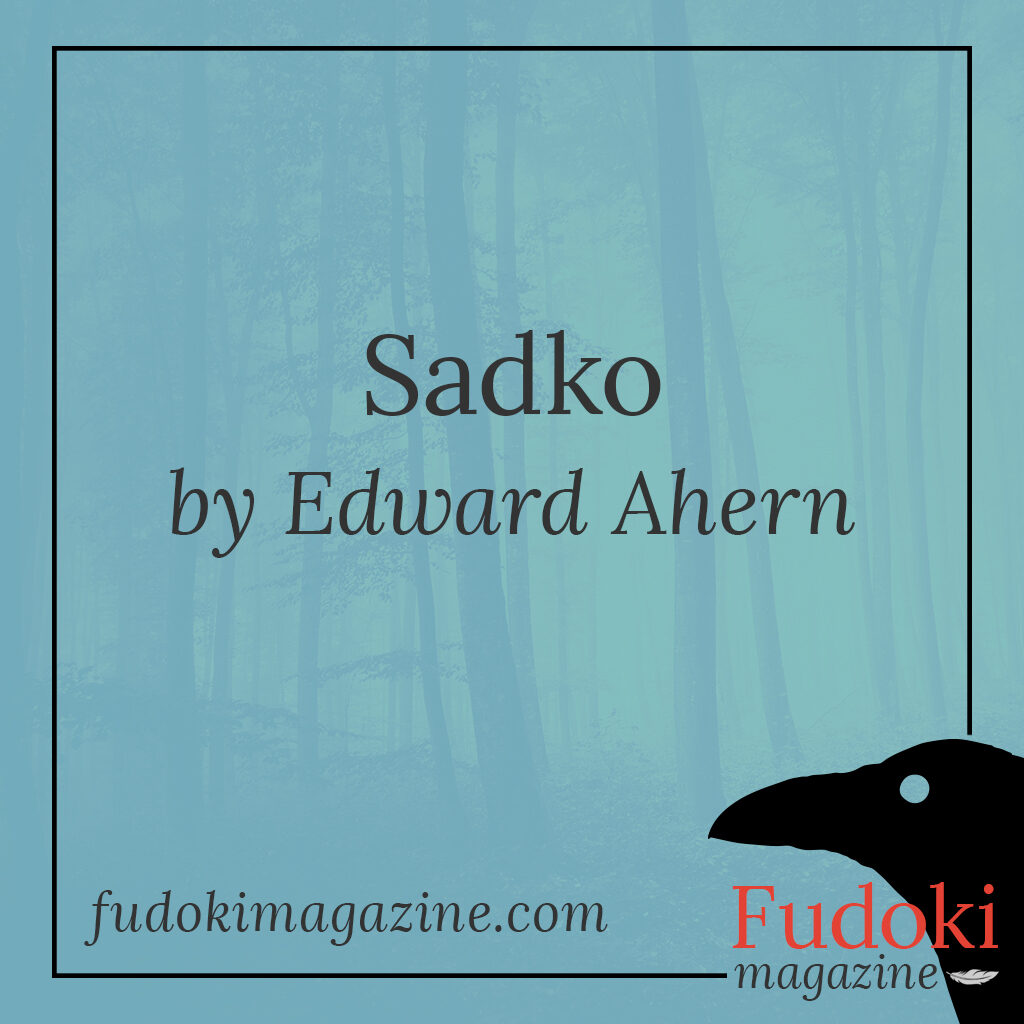 In the old days in Novgorod there was a boy named Sadko, strong, blue eyed and curly haired. Sadko was so poor that he had not a kopek except for what people gave him to play on his dulcimer for their dancing. He was not always happy, for it is dull work to always play while other people dance.

Sadko dared not dance with one of the young girls for he had no money to marry on and didn’t want to be chased away as a beggar. And the young women of Novgorod never bothered to look at the handsome Sadko. Instead they smiled with bright eyes at the young men who danced with them. The only time they talked to Sadko was to tell him to keep the music going.

Sadko lived alone, with only his dulcimer. He made do with half a loaf of bread when he couldn’t get a whole one, and with a crust when he couldn’t get a half loaf. He didn’t mind so much, as long as he could walk along the banks of the river Volkhov, which flowed past Novgorod, and play music to the beautiful river while watching the pale mists rising from the water and the gleam of dawn and sunset on the surface.

“There is no girl in Novgorod as pretty as my little river,” he said.

Near the Volkhov river was a lake, and sometimes Sadko would help the fishermen who would pay him with a little fish for his supper. One evening they asked Sadko to watch their nets while they went into Novgorod to sell their fish.

Sadko sat on a rock and played his dulcimer, singing of the lake and of his pretty little river, prettier than all the girls of Novgorod. While he played he saw a huge whirlpool form in the lake, with waves flying out and a hollow formed in the middle. In the hollow Sadko saw a big, big man with flowing blue hair. The giant, his blue hair falling to his waist, stepped out of the whirlpool toward Sadko, huge waves breaking in all directions.

The Tzar of the Sea called out in a great voice, like wind and water in a storm, “Sadko of Novgorod, My daughters love your music, and it has pleased me as well. Throw a net out into the water and draw it back in. The waters will pay you for your singing. If the payment satisfies you, one day you will have to come and play for us in the green palace under the sea.”

Waves crashed over the Tzar of the Sea and he sank back into the whirlpool, which shrank until the lake was again calm. Sadko took a net and cast it out. As it sank he picked up his dulcimer and again sang. He played until the moon was shining down on the lake. He took  hold of the rope and pulled. The net dripped and glittered in the moonlight, but held no fish.

Just as Sadko was losing hope he saw something square and dark in the end of the net. It was a sea chest. When Sadko opened it he saw diamonds sparkling like bundles of sharp knives, and gold, and green and red colored precious stones.

Strong as he was, Sadko bent under the weight of the chest as he carried it to a safe place for hiding. In the morning the laughing fishermen came back from their night in Novgorod, giving Sadko a little fish for his work.

Sadko made a fire on the shore and cooked his fish, thinking,”This is my last meal as a poor man. I wonder if I will be happier.”

Once he returned to Novgorod, Sadko began business as a trader. Small dealings lead to great ones, and soon he was one of the richest men in the city.

Every girl in the city now looked sweetly at Sadko. “Such golden hair,” said one. “Blue eyes like the sea,” said another. “He could lift the world on his shoulders,” said a third. A little money you see, opens everyone’s eyes.

But Sadko was not changed by his good fortune. He still walked beside his little river and played on his dulcimer, saying, “there is no girl in all of Novgorod as pretty as my little river.” And from time to time Sadko would throw a necklace or bracelet into the water as signs of his affection.

For twelve years Sadko lived alone in Novgorod and voyaged on trade, ignoring the hints of mothers and the sighs of young girls.

In the twelfth year Sadko was voyaging on the Caspian Sea, under a steady wind, with waves like furrows in a field, when suddenly the ship stopped.

“We’re aground” cried the sailors. But the Captain had soundings taken and there was full fifty fathoms under the ship, bow and stern.

“We’re not aground,” said the Captain,” unless there’s a rock sticking up like a needle in the middle of the Caspian Sea.”

Sadko remembered what the Tzar of the Sea had told him. “Captain, I remember an old promise I made, and I keep it now willingly,” He took his dulcimer and jumped off the ship. As the waves closed over his head the ship shot forward, flying over the sea like a swan’s feather.

Sadko sank like a stone thrown into a pool. First the water was blue, then green, and strange fish swam around him as he sank to the bottom.

On the bottom was a palace built of green wood, timbers from ships wrecked in all the oceans of the world. All green and cleverly fitted together, it was worth a ten days’ journey to see. In front, swishing their tails and guarding the palace, were two huge, knobbly sturgeons, each a hundred feet long. Sturgeons are the oldest of fish and these were the oldest of the sturgeons.

Inside the great hall the Tzar of the Sea lay resting, his blue hair flowing and his great body covered with scales. He almost filled the hall and the hall had room for a village. “Ah Sadko,” he said, “you gladly took what the sea gave you, but you have delayed a long time before visiting my palace. Twelve years I have waited.”

The Tzar, his voice like the beating of waves, said,” Sing now Sadko.”

So Sadko played his dulcimer and sang. He sang of Novgorod and the little river Volkhov which he loved. It was in his song that none of the girls of Novgorod were as pretty as his river, but also the sighs of wind over river and lake, the gentle slap of ripples under the brow of a boat, the soft splash of wavelets on the shore, the hiss of water flowing through reeds, the whispering noises of the river at night. The girls of Novgorod, who gave Sadko kopeks and crusts of bread, had never danced to as sweet a song as Sadko played.

Even the Tzar of the Sea had never heard such music. “I will dance,” he said , and stood up like a tall tree. “Play on,” he rumbled.

As the Tzar of the Sea strode past the sturgeons he grew huger still. His feet were like small hills, his green scaled body like a mountain. His blue hair swirled for miles, As he danced on the bottom the sea boiled. Waves as big as houses rolled out toward the shores, covering whole towns. He danced until he was tired and then returned to his palace and Sadko, who was still playing.

“I have thirty daughters. You shall choose one, marry her, and become a prince of the sea.”

“Better than all girls I love my little river,” said Sadko. The Tzar just smiled.

The thirty daughters came into the hall. They were all beautiful and graceful, but twenty-nine of them passed by and Sadko only fingered his dulcimer and thought of his river. Then the thirtieth daughter stood before him and Sadko cried out,”Here is the only girl in the world as pretty as my little river.”

She looked at him with eyes like stars reflecting on water. Her hair flowed darkly, like the river at night. She laughed and her voice was like river flow.

“What is the name of your river?” asked the Tzar.

“The river Volkhov which flows by Novgorod. Your daughter is as fair as my little river, and I will gladly marry her if she will have me.”

“Strange,” said the Tzar,”but Volkhov is the name of my youngest daughter.”

Sadko laughed and kissed the youngest daughter of the tzar of the Sea.  As he did so he saw a necklace around her neck and knew it was one that he had thrown into the river as a present for his sweetheart.

“Come,” murmured the girl and she led Sadko to her chambers and showed him a chest with all the bracelets, necklaces and rings which he had given to the river.

They were married and the Tzar of the Sea laughed so hard that the palace shook and fish swam off in all directions.

Sadko never returned to Novgorod. Some said that he took his dulcimer with him to another town and lived alone until he died. But other say that he lives still in the green palace beneath the sea. People say that when there is a storm at sea he is playing his dulcimer for his beloved Volkhov, and the Tzar of the Sea is dancing his tremendous dance on the bottom, under the waves.

This is a retelling of “Sadko” from Old Peter’s Russian Tales by Arthur Ransome, printed in the U.S. in the 1800’s. This story originally appeared in Bewildering Stories.