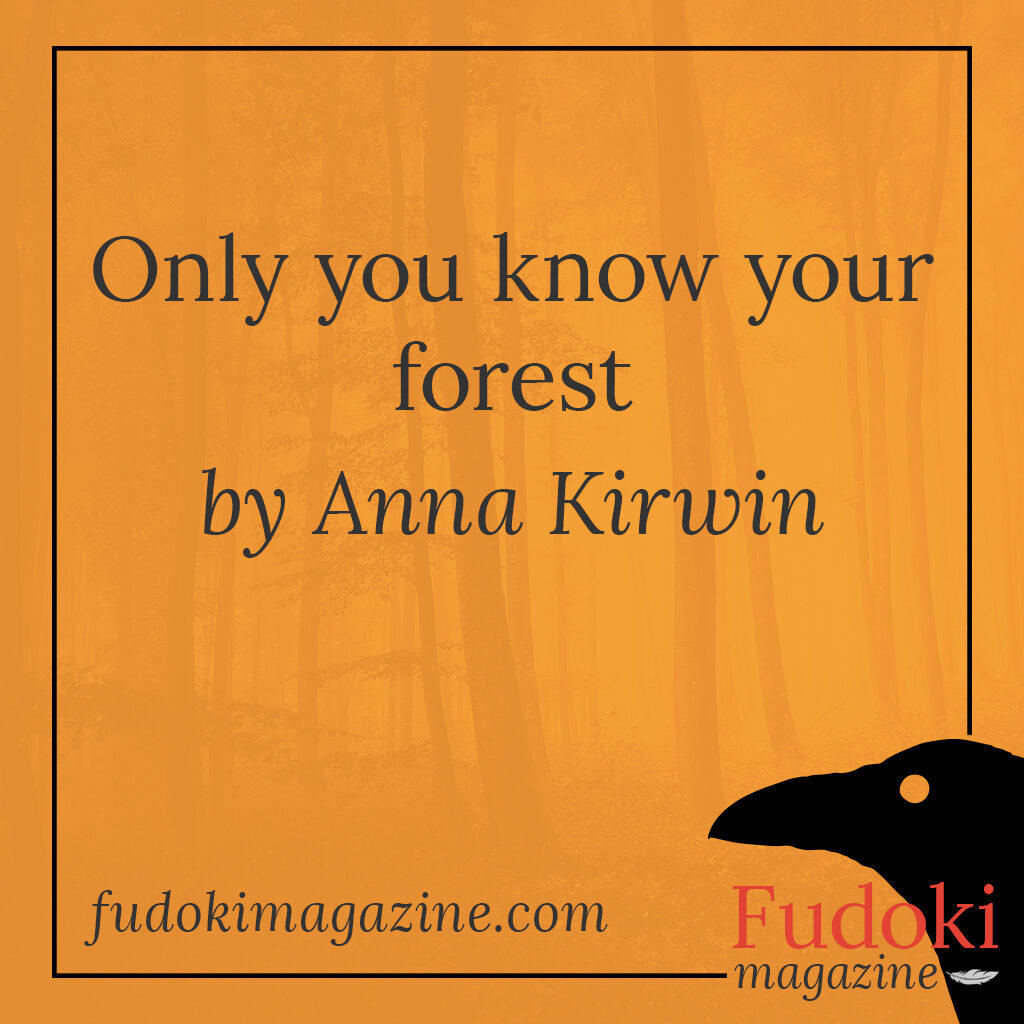 As the sun claws up to its zenith, faint wisps of rising heat climb up into my nose. My nostrils flare, just a little, almost imperceptibly. It reminds me of something; a treasured moment, a time of fear: I can’t remember anymore. This sense now awakened, I try it out a little; baby steps at first, of course. I run my finger along the evergreen bristles that surround me and inhale the fresh, pine scent. I trace its escape to a stream and take in the innocence of water. As I walk along its banks, my bouncing footsteps release the aroma of dark, moist earth.

My feet drag a little now. The mud is stickier, more gelatinous. It is less willing to release my boots and I feel it pull with every step. Sweat starts to form across my brow as I work harder and harder. Drips of it meander slowly down my nose and tease the edge of my lips.

The forest is beginning to taste victory.

They warned me about this, told me that once I had crossed the boundary into its dominion, I might never be free. Only Old Jack had ever managed to get out and he never spoke, just whistled and gasped, apparently at random, though Maude always did seem to comprehend him on some level.

That had been me too, before I came here. I had only whistled and gasped in my own cabin, but the frantic had left Mama by the time I was around seven. She’d become accustomed to the noises I made in the absence of words and settled in her insecurity. It was only when that lumberjack passed through on route to the town that she heard tell of Jack and Maude and wondered if he’d gone in talking and came out whistling, maybe there was some chance I might go in whistling and come out being able to tell of myself.

That was the weariness for me, even Mama only being able to half catch my meaning. All those knots and ridges in a tree’s bark, all those tiny details a butterfly can show in its wings; all those nuances were lost between me and them. I tried to lose my thoughts in the air. I prayed for windy days, so they might blow far from me and carry with them change, but the air stayed too still for transformation and without words to weigh me to the world, the weightlessness carried me further away.

The day after my sixteenth birthday, I think back to the pack my Mama handed me, wordless as I had always been, and how she held me so tight the gaps within me ceased to exist. I feel that clasp around my feet as I stand and the mud starts to congeal into a kind of cement. I think back to those questions I asked myself as I moved from the cabin to the road to the path to the track and past all point of human contact. How did it happen to Jack?

The lamp light was strong and steady, save the occasional quiver to show it couldn’t be ignored when Mama fed that lumberjack. She asked him all kinds of questions. I guess he thought telling the tale was a fair price for the meal. When Jack came out of the forest, he’d said, calmly to Mama, but with a little glint of danger in his eye when he turned to check I was listening, they’d found him sitting a little way along the last track. Mama asked what that was.

‘The last track to Nogold,’ he’d said. I turned my head a little and he turned to explain it to me. ‘They tried mining up there back then,’ he said. ‘But weren’t no gold up there so they came right back down again.’ Mama wanted more facts.

‘They just found him on the track?’

‘That’s right. Just sitting there, causing no trouble. Those fellas asked him what he was doin’ up there, but he just whistled some.’

‘Did they ask him where he came from?’

‘Sure,’ said the lumberjack. ‘He pointed back into the forest. Those fellas had a good look around but they couldn’t see nothin’ and Old Jack was in good enough shape, so they didn’t think he been sufferin’. They just took him home with them and he didn’t so much as argue.’

‘And he didn’t tell them anything else?’

‘We don’t,’ said the lumberjack simply, and turned his attention to the food.

I look down at my feet now and see it’s not just them that’ve taken on the mantle of mud. It slides in such miniscule motions you’d never notice it rising, higher and higher up past my knees. My legs feel solid, as if they have fused together into something strong and proud. The moisture still lingers across my brow, but it’s not from effort. It is a dew that decorates me, even in the midday sun.

I think of Mama and the love she gave to fill in all the gaps of words. Every single thought that remains in my head is one of happiness and comfort. I’ve heard the word serene before, but I never could put a feeling to it. It’s something I know now.

I run my thumb across the base of my fingers to feel ridge touching ridge. My movements echo the wind I wished to take my problems away. I inhale and sense the aroma of the dark, moist earth. I pull it up higher to me, like a blanket to hold me in the absence of her. I shake my shoulders and see one, two, three, a handful of needles fall to the ground. I reach and pull the water from the stream closer towards me and quenched, I stand taller than I ever have.

The forest has won me back.