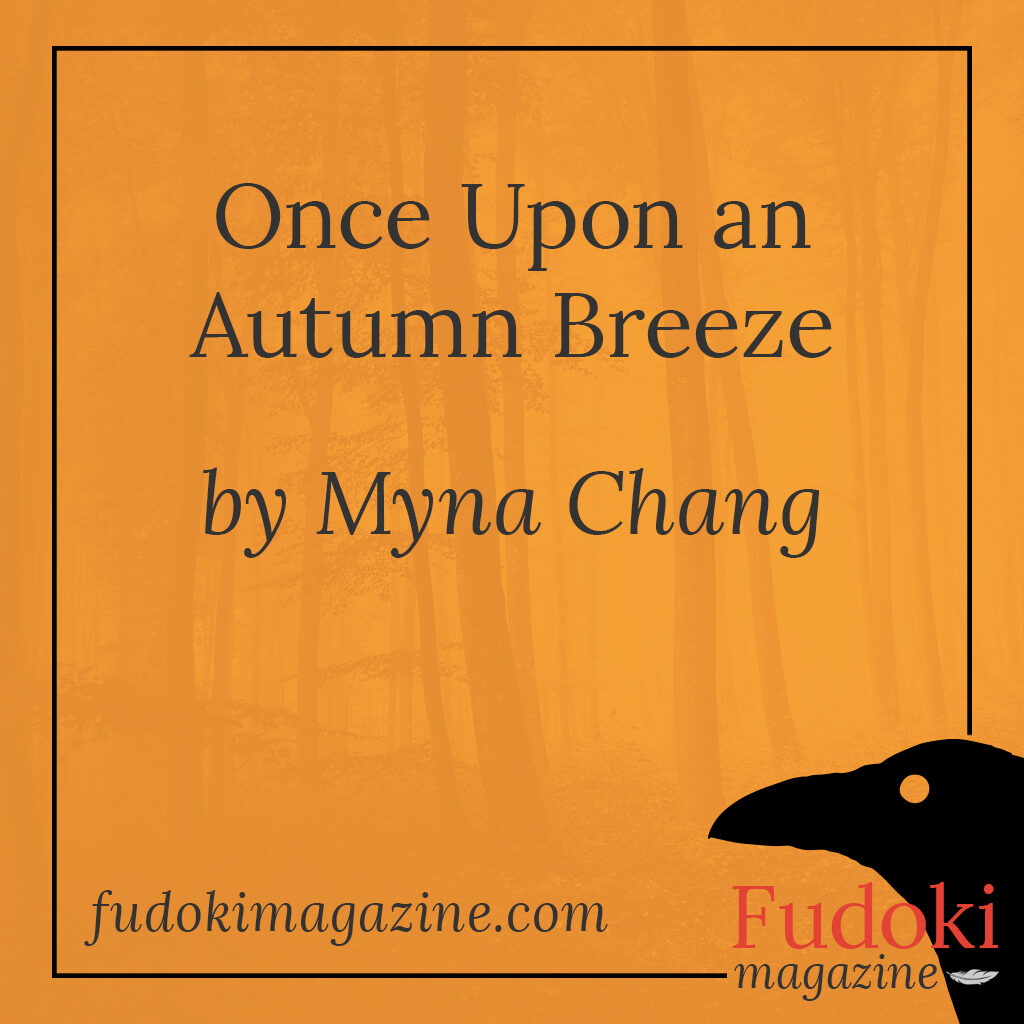 Once upon an autumn breeze, Mother Mountain lost her son…

No, he did not fall to his end in the River of Time; nor did he vanish into the Celestial Wood. You see, Mother Mountain’s precious boy grasped a different destiny, a future of wonder and wisdom, glimpsed in the crimson depth of a fluttering maple leaf.

The boy had been playing in a meadow, snatching at the breeze while jumping from stump to stump. “Be careful, my love,” she had called to him, but he’d danced and twirled and leaped, until the fall wind whisked him away, a whorl of brilliant laughter and sweet swirling leaves.

Mother Mountain’s heart squeezed as she ran after him, but she could not catch the racing air. The last she saw of her boy was a gap-toothed smile fading into the clouds.

She stood alone, unable to breathe, unable to think; able only to cry her anguish to the heavens. Her great wailing sorrow pierced the silken veil that separated the worlds, and the magic began to leak out.

Once upon a childhood echo, Red Dragon lost his way…

No, he was not befuddled by the rushing River of Time that coiled from life to life. Nor did he waver as he soared through the frayed and ragged tear in the veil. You see, Red Dragon’s heart ached for a forgotten memory, and search as he might, he could not find it.

Heavy with the wisdom and wonder of many lifetimes, he spiraled ever lower, gliding on crisp sky, until he skimmed the tips of a burnished forest. The sweep of his once-mighty wings slowed, and his scales began to fall, slowly at first, until the Celestial Wood dripped crimson.

Red Dragon marveled as he settled on the twisting footpath at the river’s edge; was he not too large to alight on such a narrow lane? The question slipped from his mind at the sight before him. A laughing child reached for flying leaves and skipped to the river’s edge, only to be called back to the circle of her mother’s arms.

He watched, breathless, thoughtless; able only to hobble toward the woman, for his wings now were gone, and his two unsteady legs creaked stiff.

Once upon The Dragon’s Turn, magic found its balance…

“Do not jump so high,” Mother Mountain called to her daughter. “And not so close to the river!”

The girl giggled and wiggled, as little ones often do.

Mother Mountain stiffened, wary, as a stranger approached. The wizened man bowed in greeting. He was clothed in the glow of the timeless trees.

“Good Mother, why do you hold your daughter so close? Surely she would like to explore these sweet woods.”

Mother Mountain scowled. “Children may be stolen away by any stray puff of air, Good Sir.” She wrapped her arms around her eager girl.

“Look, Mama, his tunic is made of autumn leaves.”

The old man’s overshirt crackled at the touch of his wrinkled hands. “I remember this sound,” he whispered.

The girl darted from her mother’s side to snatch a red treasure from the man’s shirt. “It’s not a leaf at all, Mama. It’s a scale.”

“No, my love, drop that thing!” Mother Mountain commanded. “It is filled with danger.”

“Not danger,” the old man said.

“Wonder,” the child breathed. She danced and twirled and leaped, grasping the shimmering scale as she spun. “It’s magic, Mama!”

Mother Mountain shook her head. “There is no magic left. It all leaked away, many lifetimes ago.”

“Some of it remains, Mother,” the old man said.

Mother Mountain gasped. The man’s voice had lost its tremor, and his wrinkles smoothed as she watched. The years fluttered from him with the last of the crimson scales.

She squeezed her mother’s hand. “The wind will bring me back to you someday, Mama.”

Mother Mountain’s heart spasmed, but she loosened her grip and allowed her daughter to spiral away in a flurry of crystalline laughter. When the final note faded, a familiar ache enveloped Mother Mountain, and all the worlds trembled with her as she cried her sorrow.

She blinked. A scattering of snowflakes drifted to the forest floor, and her lost boy stood before her, as on that long ago day. His gap-toothed grin was just as she remembered.

She scooped him into her arms with a different texture of cry, and this time, the worlds held fast.