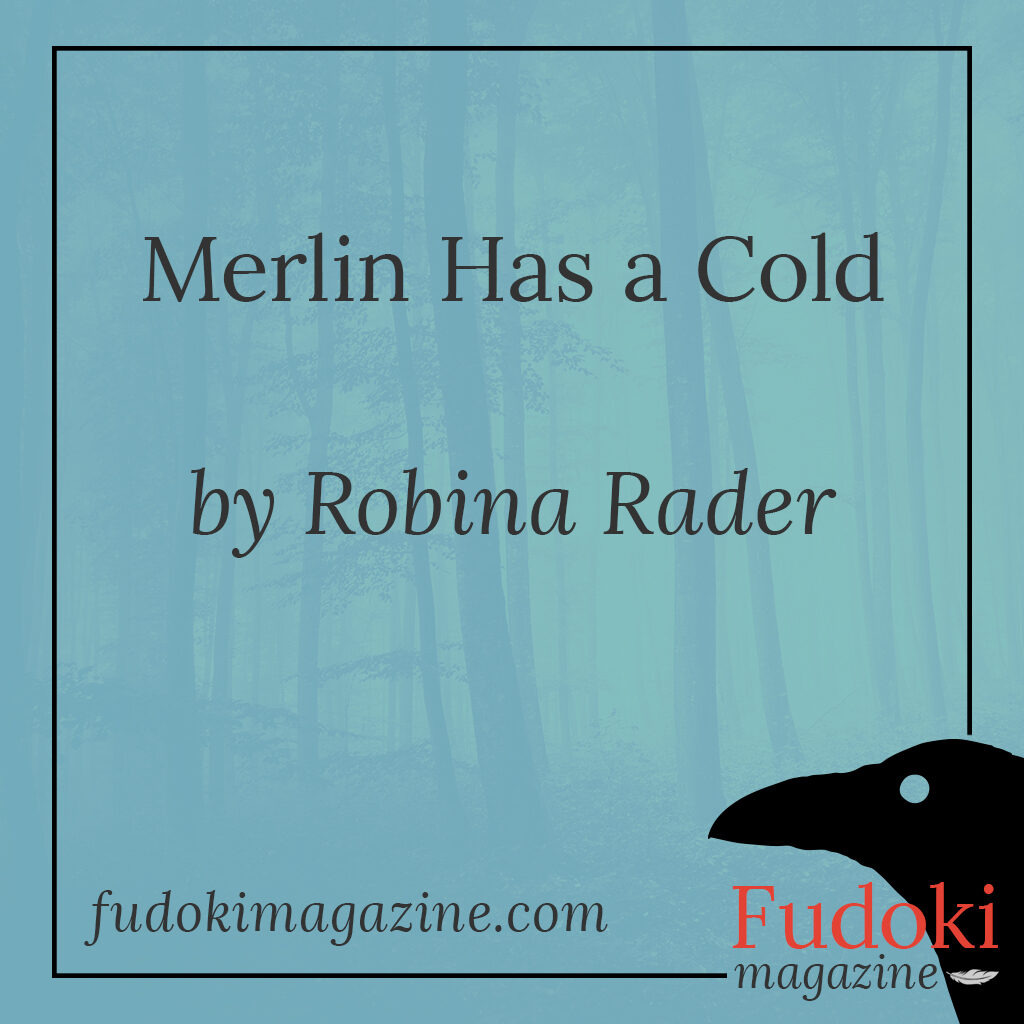 What a commotion outside! The crows were screaming a warning of approaching danger. Merlin moved to the door.

Now he could hear footsteps of one person wearing boots. As the figure came into view, Merlin raised his eyebrows. No wonder the birds were alarmed – they had never seen anyone dressed like this fellow! His rich, colorful garment proclaimed royalty or nobility from some exotic court far from Camelot, far from Britain. As the man drew near, Merlin felt a growing recognition. He had met this man before, somewhere, long ago, and could almost come up with his name.

“Merlin, old friend, is that really you?”

The voice crystallized a memory, and Merlin was able to respond, “Ishaq!  As I live and breathe, I never expected to find you at my door! I’m glad to see you, but what on earth brings you here? Come in! Come in!”

Merlin poured some warm mead, and the two men sat near the fire to talk.

“Ah, this feels good, Merlin. By the gods!  I don’t know how anyone can live in this climate. I’ve just come from the north – it isn’t even autumn yet, and the nights are bitter.  How do you stand it?”

“Well, I used to say our winters build character, but I must admit I feel it in my bones as I get older. I think I’m coming down with a cold, too – never used to. But tell me, Ishaq, what were you doing in the wilds of North Britain?”

“It was a consulting job. I was sent for by a coalition of clan chiefs who said they wanted my advice. It turns out they wanted magic that would ensure success in battle. I tried to tell them that isn’t how it works. They were very, ah, disappointed, shall we say, and I needed a bit of invisibility to get out of there with a whole skin. Very warlike, they are. Short-tempered and violent. I’m going to be extremely cautious on my way back to Egypt.”

“What battles were they contemplating, my friend? Were they thinking of attacking King Arthur and his knights? They will need magic if that is the case.”

“Yes, they would like to conquer Arthur’s forces, but they fight among themselves and are so disorganized I doubt they could mount a campaign within a year. At any rate, they won’t try anything over the winter.”

Merlin raised one eyebrow. “Oh, really? That certainly sounds like good news. There have been rumors of unrest.

“But let me tell you about my latest project. I’m working on a transport spell. I have to fine-tune the incantation, but I’m getting close. Last week I was able to move the cat from one side of the room to the other.”

“Were you able to move him back?”

Merlin laughed. “Oh, he took off like a shot and hasn’t returned. My goal, though, is to make my own travel easier. It’s more than a day’s journey to Camelot, and although I know that Arthur doesn’t need or want my advice every day, I sometimes feel I should be on hand more often. If I could just get there in an instant…”

“He’s a big boy now, Merlin, and from what I’ve heard he’s a very successful king. You taught him well. Let him know he’ll have a quiet winter, then why don’t you pack up and come to Egypt with me for a few months?  The hot, dry air will cure that cold and oil your rusty joints. You’ll feel years younger. We’ll have a great time. I’m going to join a caravan to Morocco – have you ever been to Morocco?”

“That’s a tempting offer, but I can’t leave right now. Perhaps I’ll travel south in mid-winter, when it gets really cold and my joints ache.”

As soon as his guest departed the next day, Merlin sent a message to King Arthur, telling him what Ishaq had said about the warring chiefs and adding that he didn’t believe a word of it. That tale of escaping invisibly was a blatant lie. Bah! Ishaq couldn’t do invisibility even if his life depended on it. He must be earning his consulting fee by spreading disinformation. “Prepare for invasion from the north,” the message concluded.

In due time he received word that the invaders had been repelled. The king sent his thanks and a cordial invitation to Camelot for winter solstice festivities.

By that time Merlin was confident enough in his transport spell to try using it for the journey. The weather was so cold and miserable that he couldn’t face the thought of going on horseback or by wagon. And his cold was back with sore throat and sneezes. He thought wistfully of Ishaq and sunny Egypt.

He carefully recited his incantation, ending “longitude expedian teleport to Cam (achoo!) elot.”  Merlin found himself whirling through space, thankful that the sneeze had not caused the spell to fail. He landed with a thud in a cloud of dust and sneezed again. What part of the castle had he landed in?  He seemed to be among livestock. He wiped his eyes and was looking around for a familiar landmark when someone called his name.

“Merlin! I’m glad to see you! You’re in time to go with the caravan, after all. We’re choosing our camels and should be on our way to Morocco in a day or two. I was afraid you’d miss the trip.”

“Ishaq! Where is this place? I was using my transport spell, which has been working perfectly, and… oh, the sneeze must have sent me off course. I was on my way to Camelot.”

“And that’s exactly where you ended up, old friend. Welcome to the Cairo camel lot!”

One thought on
“Merlin Has a Cold”