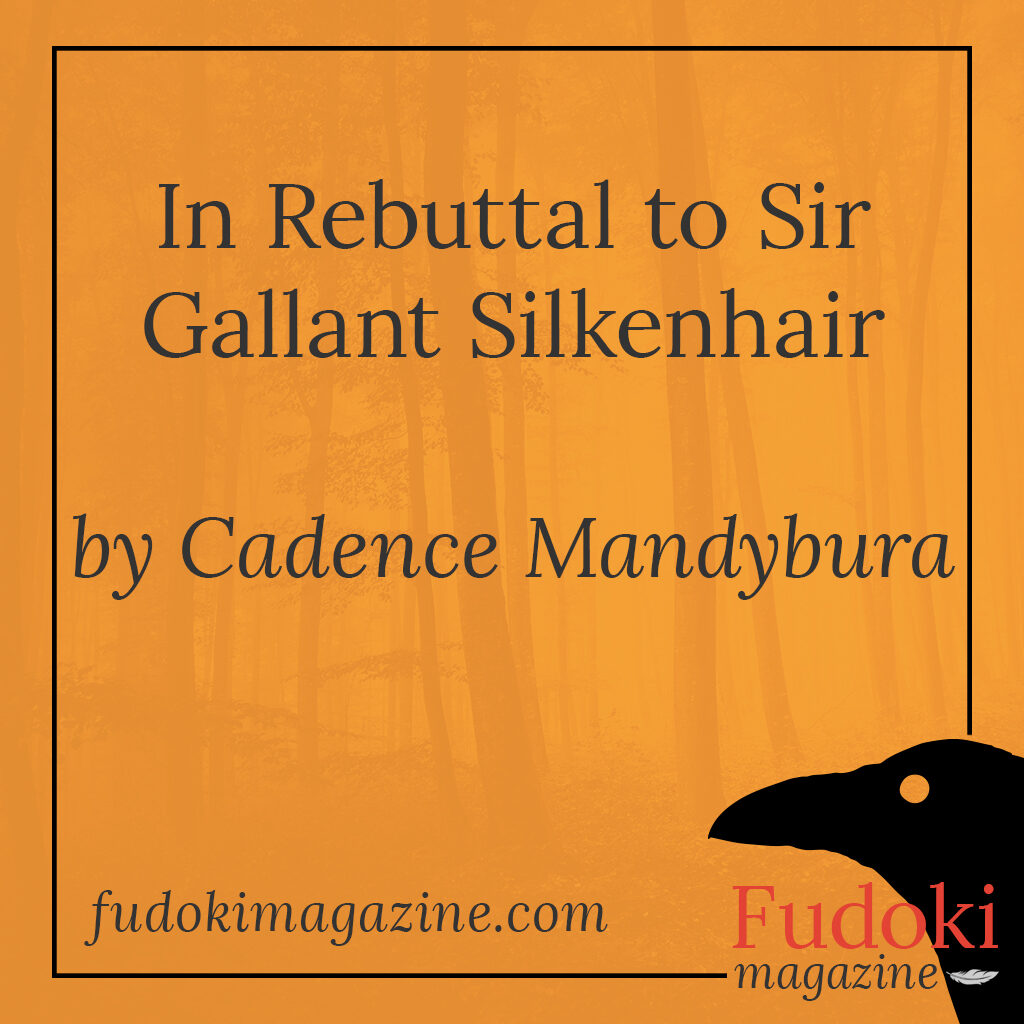 Now that Sir Gallant Silkenhair has told his version of the story, I beg the court’s patience to hear mine.

My name is Fran. I am not an orphan, nor was I trapped in a tower in the woods against my will, besieged by a malevolent red dragon. My parents are alive and well and keep a small tavern on Whitby Street—you might know it, the Quarrelsome Duck, famous for ma’s flaming whisky? No? Well, in any case, I had a perfectly normal childhood. I wasn’t locked up or locked out, or terrorized by evil relatives, although Aunt Marge can be a bit much when she gets into her cups, hah…

The point is, I wasn’t captured or imprisoned and I didn’t run away. I legally inherited the house in the woods—and it is indeed a house, please note. If Sir Silkenhair thinks that a two-room cabin is a tower, I’d be wary of his estimation of other… measurements.

Grampy George built the house as a young man, thinking he could be a farmer-poet, a popular pursuit at the time. But then he met Gramma Thelma, and she wanted to stay in town… you know how love stories go. The house was abandoned, until I came along.

To continue my story: at age eighteen, I took possession of the house in the woods, and Grampy George, rest his soul, helped me establish a small plot and some livestock. Today, I’m self-sufficient, and only a day’s ride from town, so my family visits often.

The path to my homestead isn’t exactly marked, but nor is it hidden, or dangerous. I’m curious about all the perils Sir Silkenhair claims to have encountered on his journey, as I’ve never seen any fire-belching pits or three-headed dogs near my property.

Then there’s the matter of the dragon, which might be the source of all this confusion. I can understand how Sir Silkenhair might believe that he fought off the great beast, but in fact, he only survived because I called her off. Her name is Ruby and she’s been with me since she was a chick. There are so many cruel myths about dragons, I don’t have time to get into them all, so I’ll say what I know: dragons are sensitive, intelligent, and, if properly trained, make excellent shepherds.

Also, Ruby’s pretty small, the size of a donkey. Not as big as a church, as Sir Silkenhair claimed.

I try to keep Ruby hidden from visitors, even family—my brother Roger can’t keep a secret to save his life, let me tell you—but she’s free to fly where she likes. Someone must have spotted her from the main road, because the story eventually met the ears of Sir Silkenhair, and decided he needed to investigate.

To sum up, gentlemen: Sir Gallant Silkenhair told you that he defeated a dragon and rescued a hapless maiden.

I’m telling you that he abducted me, and I rescued him from Ruby.

Now, if you’ll excuse me, it’s a day’s ride back home. I have chickens to feed and a goat that’ll need milking.