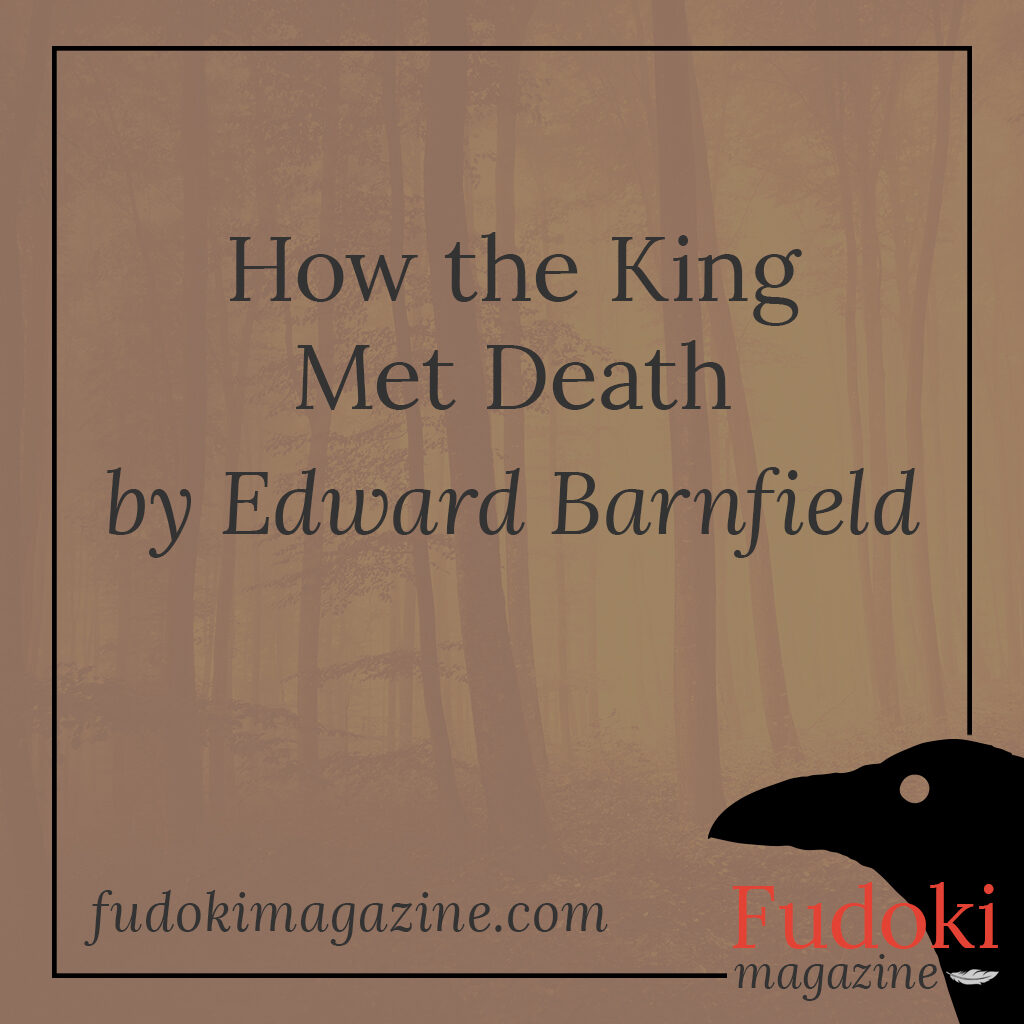 There was once a king who had three sons. Of course, he had a great deal else besides – a castle in the hills that glittered and shone, a crown dusted with jewels from every corner, more gold than could be spent in a hundred lifetimes. But it was his sons who took his full attention one cold winter morning.

“My boys,” he said, staring down from the high throne, “I have a task for you.”

“Tell us how we may serve, majesty,” said Geddus, the eldest. He stood a head taller than any man in the room, was as broad and solid as an oak door, and had a taste for blood on the battlefield. The King’s advisors shuddered in the night when they dreamt of Geddus’s coronation.

“My request is simple,” replied the King. “Find Death and ask him what he wants. I wish to bargain.”

The brothers paused, exchanged nervous looks. Finally, Wulfric, the second son, spoke up. “An unusual request, my liege. Do you know where we should look for Death?”

Wulfric was considered the cleverest of the three, handsome as the day, polite and eager to please. The wisest counsellors, however, warned you that he was the one to be wary of.

The King sighed. “For 20 years, you have been raised as royalty. Now you must use that education. Every man has something he wants, something he is willing to trade. Find out what it is that Death coverts, and I will name you as my heir.”

Geddus made a noise like a bull in the ring; Wulfric merely clapped once and bowed. Dunstan, the youngest, stout and shy, said nothing. The court had no opinion of Dunstan.

When they had left the palace, Geddus was the first to speak. “Death is greedy. He desires every soul. I will go to the battle on our borders, where the fighting is thickest, and find Death there.”

Wulfric could not fault his brother’s logic. He offered to equip the war party and provided his own men as retainers, so that they could leave that very afternoon.

There was always a skirmish at the edge of kingdom, where barbarians fought over every rock and tree. Geddus’ arrival in full plate and chain caused consternation in the melee, who mostly fought in war-paint and snarls. At the top of a bank, he spied a hooded man in a cloak, equal in height to himself.

“Death,” he roared. “I will parlay at sword-point.”

Geddus pulled on the reins of his fiery red steed and crossed the field at a gallop, scattering the tribes and their mercenaries. He had almost reached the bank when a single arrow looped through the air and came down squarely and safely in the back of his head.

Had the Prince been but a few inches shorter, the counsellors wailed, he would be alive today. In addition, they reasoned, it was most strange that – after generations of fighting with stick and nail – the barbarians had taken to using arrows that very day.

“I fear my brother’s search took him in the wrong direction,” said Wulfric, who appeared at court the next day in his finest robes, with notably richer retainers. “In my studies, Death is always drawn to pain, like a collector. That means we know what Death wants and where to find him.”

That night, Wulfric visited the great plague hospital that sprawled in the old part of town. The Sisters of Charity, who knew of Wulfric’s reputation and respected the depth of his pockets, agreed to facilitate his interrogations. They shook old men awake, stopped the priest mid-way through last rites, so that the prince could question and scold.

“Where is Death? Have you seen him?”

Finally, a sickly peasant pointed a crusted hand to the courtyard. One of the sisters was there, black hair and pearl-white eyes. Wulfric, who was not an easily distracted man, marvelled for a moment at her beauty. He walked to her, took a quick breath to make his case, then fell like stone in a millpond. The doctors who examined him said it was the quickest infection they’d ever seen.

There was great sorrow in the palace. Lightening had struck twice and, worse, the King was no closer to his answer. Finally, Dunstan spoke in a voice cracked and quiet from disuse.

“I think Death is lonely. That’s why he takes people. For company.”

Nobody thought to stop him, so the young man went into the forest to search for the most remote dwelling he could find. Eventually, he came across an old stick cottage in the swamp and the even older woman who lived there, alone with the moss and oak.

Disaster didn’t occur to Dunstan that day. The roof didn’t fall, the brambles didn’t scratch. Instead, he sat and spoke with the stranger until the dawn came, about her life, her family long gone. As he left, he realised that no-one had ever listened to him so closely, so kindly before. He let his crown sink into the murk and set off for a new life.

Alone at last, the King found Death at midnight in the palace. In the half-light, Death’s appearance shifted, first crone, then girl, then child.

In that moment, the King understood that Death existed in the space that life left out. All the time he had spent plotting had stolen the joy of his castle, his crown, the company of his sons. Only then did he understand the awful power of Death’s indifference.

He called out for his counsellors, his retainers, his boys – but none came. It would be fifty years before he met Death again.