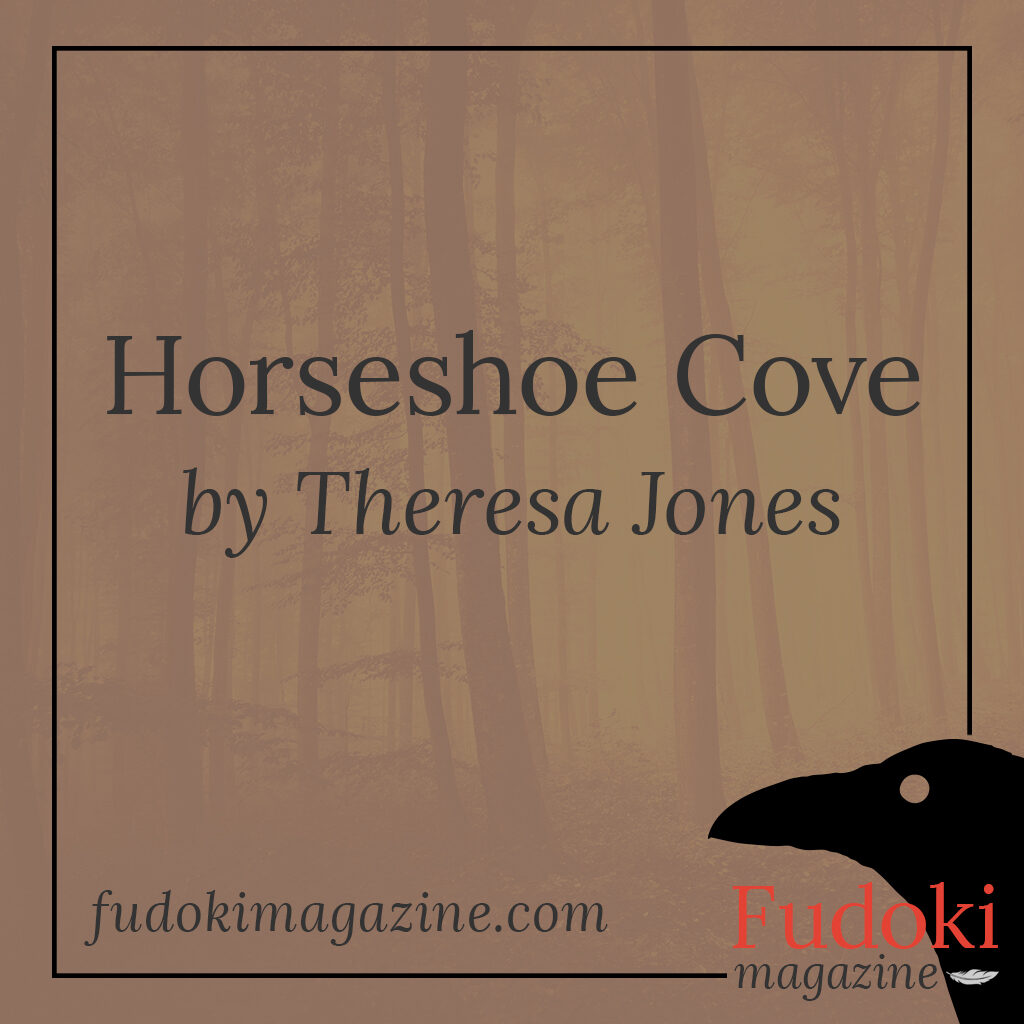 Footprints, deep enough, big feet but narrow.  The mud deeply impressed, tracks leading down the path.  Whatever made them was tall and heavy. Solid, not human, or not all human.

Alana walked on past the tracks towards the slopping path to Horseshoe Cove.  The two dogs on high alert at her side.  Pippa, a large wolflike female and Bert, a snow-white skinny male sight-hound.  Chasing seabirds, a favourite pastime.  She clipped the leash back on Pippa, “Be good now, no pulling”.  Ahead of her, the sea stretched out, sun glistening on the low rolling waves.  Gentle, lapping.  No white horses.  Tide going out, or coming back in?  She couldn’t remember how to tell.  The cove was empty. Bert ran ahead down the rough, almost overgrown path.   The wild was beginning to reclaim this place.  It had been well trodden in years past.  She needed the seaweed for the winter, using it would make the difference for surviving the severe cold.

Almost at the cove, Pippa caught sight of the sea birds floating on the waves towards them.  Tide was, coming in then.  Pippa danced at the end of the lead, straining toward the birds, Bert had raced ahead splashing through the water.  Alana gave a gentle jerk on the lead.  “Wait, be good.”  Nearly down, looking across the beach at the lush glistening blankets of seaweed, she half placed her foot on a lichen covered rock just as Pippa renewed her efforts on the lead, jealous of Bert’s freedom. Alana slid, tripped forward trying to save herself and smacked her head on a small rock.

She lay still only just conscious, gently moving her head from side to side.  Wriggling a little to assess the damage.  Ah, better lie still a minute.  She raised her eyes, aware that she still gripped Pippa’s lead.  Bert ran back and forth, not paying attention to her.  Pippa’s double lead was attached to Alana’s waist as well as her hand.  Pippa resigned herself to waiting.  She lay down beside Alana, her head on Alana’s waist.  The waves gently lapped toward them.   Salt water began seeping into Alana’s hair, wetting Pippa’s fur. She knew that this cove filled quickly, each minute reduced the available sand.

Bert had tired of the birds.  Alana strained her neck, she saw him sitting above her on the rocks.  Swivelling her eyes to the side, Alana saw the birds were bobbing deeper now.  Overwhelming tiredness engulfed her, she closed her eyes, drowsy.

A shadow fell on Bert, he whined, crouched low, as the scent of rotting meat passed by.  Pippa barked furiously pulling back on the lead, quietening as the smell hit her.  The shadow of the creature fell over them, blotting out the setting sun.  A thin bony foot prodded Alana’s thigh.  Long toes ending in pointed yellowed nails pushed against the flesh which yielded inward, her body moved a little.

He called upward, his voice rasping, like nails down a blackboard “Good eating on this one.  A little soggy, but salt will improve its flavour”.  He undid Pippa, who lowly growling slunk away from the rank smell.  She ran to Bert.  Cowering, they watched from the rocks.

The crow creature, part man, part crow, a mutation, a living fusion of nature,  tentatively prodded and poked at Alana until she came fully awake.  The acrid smell drawing through her nostrils was raw, cloying.

She shrank from the smell and the look of him.  Her eyes were black, pupils dilated and huge, her breath came in small gasps to reduce breathing.  He picked the leash from her hand, holding it and jerked it upwards, smiling that it was attached to her.  “Get up”.

Groggily Alana rose, stumbling, water dripping from her.  She saw the waves were around her now, she could have drowned.  Pity?

The crow-man led on and the lead was pulled, she followed.  Behind her, she signalled for the dogs to follow, sliding her fingers into her pocket to ensure her blade was still there.

Deep breath, this would take a bit of thinking.  Focus, girl. Bide your time, let him get complacent.  Then strike and make it count.