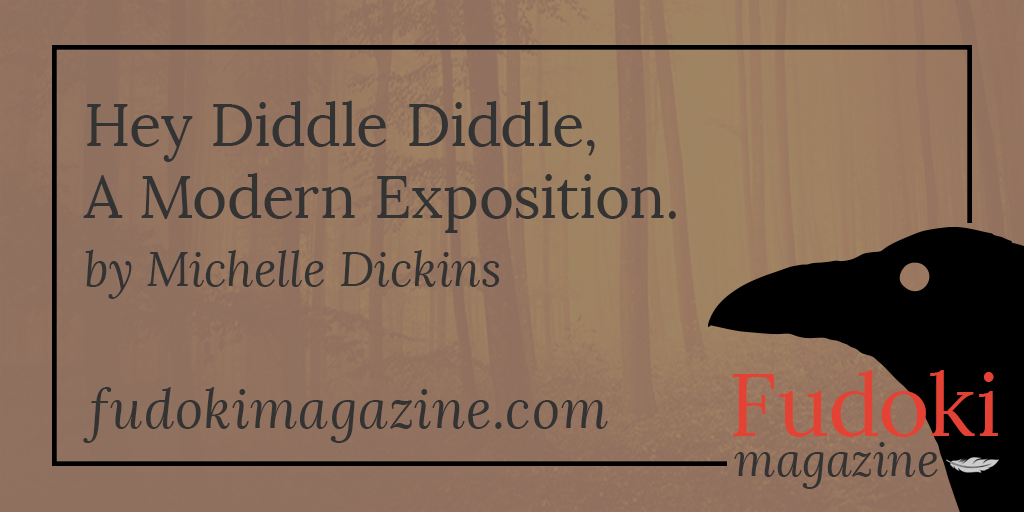 Diddle, the laziest, most unmotivated cow in the paddock, could barely raise a moo. He had an appetite for green pastures and liked to rub his neck and body against the gnarled tree stump at the top of the hill, but he was the only cow in his herd to have never jumped over the moon. When the other cows stopped jumping over the moon the Spoons knew they had a problem.

Each full moon, Rufus the Kelpie would yap at their hooves, circle them, run at them, creep on his belly to scare them from behind, and even pounce on their backs, but not one cow jumped over the moon. Rufus hadn’t laughed in months. He hid under the veranda as the yaps and barks of the neighbouring dogs found him the object of their ridicule.

Mr. and Mrs. Spoon, fourth generation, moon jumping cattle breeders, stood on their veranda staring at the moon. The moon was distant, dull and unappealing and the moon cycles were becoming erratic and unpredictable. They were going to have to change the way they farmed.

After brief consultation and a large government grant they formulated a plan. They would train the cows in the art of the slingshot via an elaborate system of pens, pulleys and gigantic rubber bands, an enterprise they could expand to send other animals into orbit. Their vision was for the night sky to be sparkling with flying animals of all descriptions, a smoke screen for the declining health of the moon.

By the next full moon, the slingshot was ready. The other cows nudged Diddle to the front of the line. With the sling in his mouth, Rufus crept back until the band was at maximum stretch, before letting go. Diddle catapulted through the air but a miscalculation saw him skewered onto his favourite tree stump. Rufus laughed and laughed and from that, the Spoons knew they were onto something.

Diddle couldn’t be saved. Mr. and Mrs. Spoon decided to sell his carcass to The Cat and Fiddle. He was served as the lunchtime special. The beef kebabs became so popular that Mrs. Spoon negotiated an ongoing deal with the publican to supply meat. Within months the farm was making more profits from the sale of meat than from the moon jumping cows, and with fewer overheads.

Mr. Spoon continued to farm this way until his eldest son took over. Mrs. Spoon ran off with Ramona, the dish pig from The Cat and The Fiddle. They had hit it off during her frequent visits to the pub and she made the decision to leave Mr. Spoon when Ramona promised her the moon.

One thought on
“Hey Diddle Diddle, A Modern Exposition.”