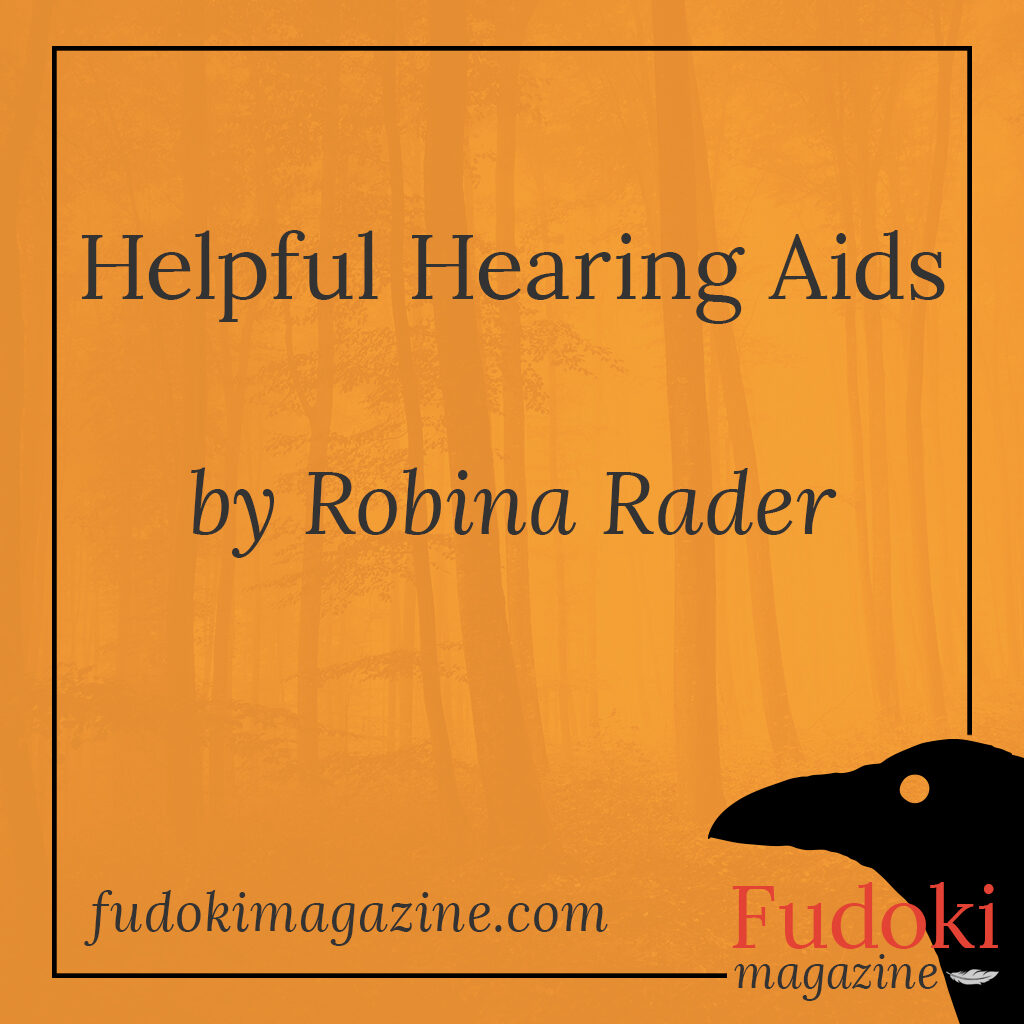 The answer was always, “They’re great.” And he meant it. Herb could hear tones that he’d been missing for years, he could follow a conversation, and, best of all, Angie had stopped nagging about the volume when he watched TV. Herb felt younger; he had more energy. He and Angie went out more often. He considered getting a toupee, but Angie convinced him that bald is sexy. Well, then maybe he’d grow a beard, but, no, Angie assured him it would make him look older. He compromised with a neat mustache.

It took him a while to get used to the hearing aid control app on his phone, but he mastered it in a few weeks. He could control loudness, switch to a mode for situations with a lot of background noise, and check the batteries. And his phone calls came through his hearing aids. That surprised him at first, and puzzled Angie. “Who are you talking to, Herb? I didn’t hear the phone ring.”

After a few months, he started getting static occasionally. He brought it up at his next appointment. The audiologist couldn’t find any explanation, and recommended a different battery.  That seemed to help for a while. Then, instead of static, Herb could make out faint voices.

“What? Yes. Who is this? I think you have the wrong number.” He glanced at his phone. Nothing there.

Herb turned off the hearing aids, removed them and put them in their case until the next day. He installed new batteries before turning them on again.

As he was driving up a steep hill that afternoon, the voice shouted in his ear, “SLOW DOWN! SLOW DOWN! PULL OVER!”

Herb was so startled, he slowed down and pulled to the edge of the road, just as a truck full of poultry crates sped over the hill, narrowly missing both the Amish buggy it was passing and Herb’s car. “And that, children, is why we don’t pass on a hill,” said the hearing aids.

As Herb regained his composure, the voice went on, “I can help you with a lot of things, Herb, not just traffic safety. Do you ever bet on sports? I can tell you who’s going to win tomorrow.”

“No, I don’t gamble, but thanks for the warning back there.”

“Maybe you should consider it, Herb. I know you’re on a fixed income. You could use some extra money; wouldn’t you like to take Angie on a cruise?”

“Nope, I had enough cruising in the navy – more than enough. I was so seasick they called me Horizontal Herb.”

“Well, there are plenty of uses for a little extra money. Come on, Herb, give it a try. You can bet online, you know. You don’t have to find a bookie.”

The voice continued to hound him for weeks, until Herb finally gave in and said, “All right. Just one time, though.”

It seemed disloyal to bet against his favorite team, but the game, though close, ended in an upset, and Herb won an amount equal to his monthly retirement check. His vow of “just one time” was forgotten, and an occasional bet padded his income to the point where he could send Angie and her sister to Italy to visit the town where their grandparents were from.

When he realized he had enough to make a down payment on a new house, he and Angie found a cozy retirement home – small, one story, low maintenance, good neighborhood – perfect. It cost a little more than Herb had hoped, but Angie loved the place, and the hearing aids would keep up the mortgage payments. Retirement was going a lot better than expected.

The hearing aids continued to give warnings, advice, and betting tips. Herb reminisced one day, as he drove that narrow country road again, about the near miss the hearing aids had saved him from. “It was right along here,” he said. “How does it look over the hill? Any more idiots coming at us?”

In his ears he heard only a high-pitched beep, as the batteries died.