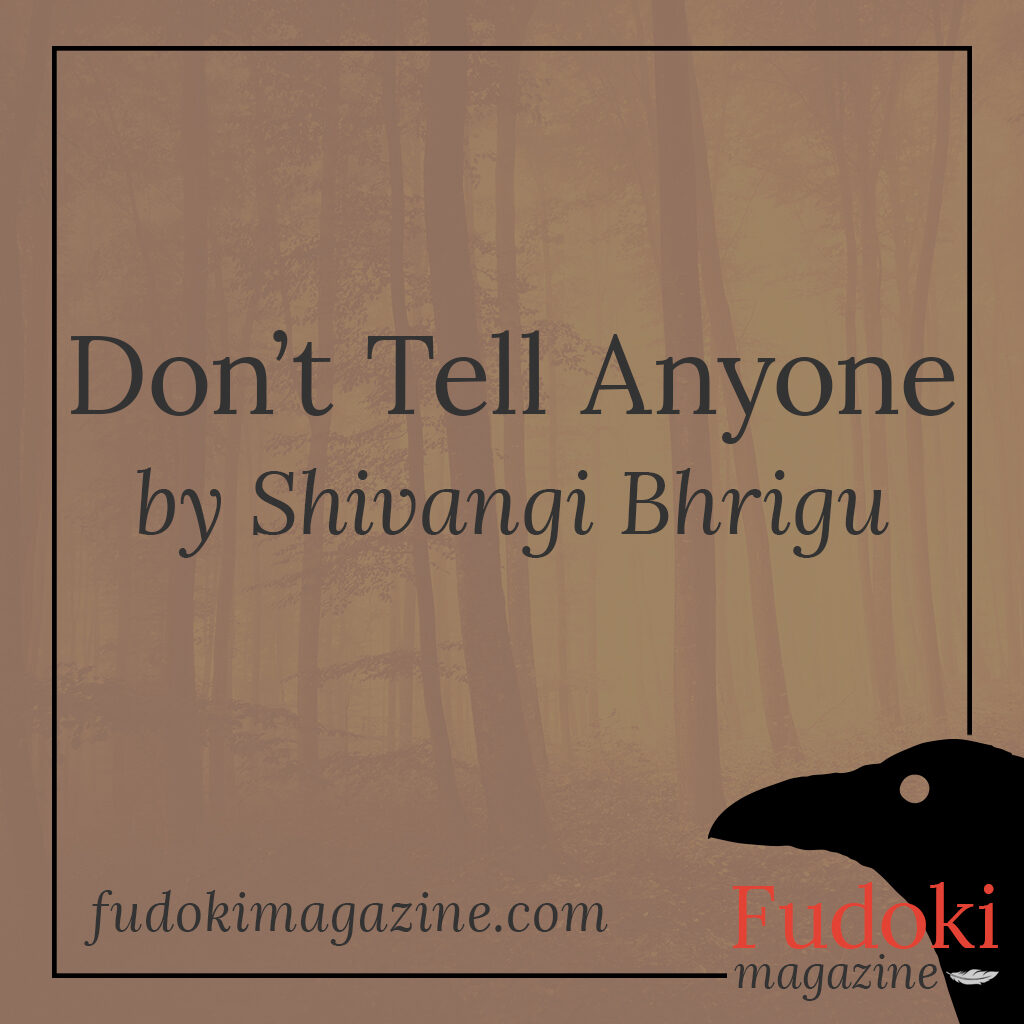 Shrouded in a diaphanous, white saree, the woman advances, emerges from the shadows. Her mouth is open in a scream nobody can hear but Sakshi can feel the air vibrating from it. As she takes another excruciatingly slow step forward, just before she walks into a bolt of moonlight, Sakshi winces, knowing what to expect.

Winces, but does not look away or close her eyes.

She had done it the first time and the result was… disastrous. Disastrous, to say the least. She winces but continues to look at the woman who is emerging from the depths of the night’s darkness, wailing soundlessly.

Bony, withered arms bring down small, clenched fists, the skin grey and dusty like soot, against a heaving chest. The sari and its traditional high-necked, long-sleeved blouse cover most of the rest of her body. The end of it drapes limply on her head but does nothing to hide the wild, matted steel-coloured hair. But her face… oh god, her face.

It was like skin and flesh had peeled off to reveal the ghastly bone of the skull, teeth stretching into a jarring smile and eye sockets pitch black.

Sakshi forces herself to keep her eyes on her, swallows the sourness that rises up her throat. She falls to her knees as the woman walks right through her, still beating her chest, her inaudible screams still reverberating through the air. It feels like she was suddenly thrown into the arctic seas. Sakshi does not have to turn around to see that the woman walks down the corridor to disappear in her younger sister’s room.

“A banshee? That’s hilarious,” Giri chuckles. “I mean, aren’t those from Irish folklore? It’s so bizarre that an Indian family would be haunted by a banshee.”

Sakshi stares at the tabletop. “Tell me about it.”

“How did that happen?”

“And you’re saying your little sister is going to die? Because the banshee went into her room?” Giri laughs again. “That’s ridiculous.” He clears his throat and sobers up when Sakshi does not join in. “So… is there something you can do to prevent it?”

Sakshi glances at him. There is something odd in her eyes. “Yes.”

“Oh? That’s great!” The mirth resurfaces. “What is it? Do you have to go find a tanrik baba to help you get rid of her and save your sister?” A snort punctuates his question.

She lifts her cup of hot chocolate to her lips, allowing the scalding liquid to spread its warmth throughout her body before answering him, but the chill from the previous night stays deep in her bones with a despondent ache. “If I talk to someone about her,” she finally says, “it saves my sister’s life. The banshee, or whatever she is, goes for that person instead.”

Giri explodes in laughter, spraying the table before them with coffee. Sakshi cannot even bring herself to grimace. Although the pace of her heartbeats is increasing now, she calmly reaches for a napkin and starts cleaning.

She sighs and gulps down what remains of her hot chocolate before picking up her bag. Her work here was done. “I guess you’ll find out soon.”

When she looks at Giri, his smile is starting to fade at the edge. He doesn’t look so confident or amused anymore. She should feel bad. She knows she should. But somehow, the guilt just does not materialise.

She knows at once when Faiza’s name flashes on her screen.

“Did he say anything to you when you met him yesterday?”

Sakshi looks at the breakfast her aunt placed before her. “No.”

“I just don’t understand,” her friend sobs. “Why would he do something like that?”

Everybody is dressed in white, as is the custom at Hindu funerals, his mother sits near his head, catatonic with grief, whereas his father sobs silently, standing farther away. The guilt swirls within her at the sight of them but then she remembers her sister. She remembers her family.

They’ve only lost a son. She’s lost all of them. The only people she has left are her eleven-year old sister Meera and an aunt. She could not lose Meera too. She did this for Meera. It’s fine. She pays her respects to Giri’s parents and moves closer to the door, intending to not stay too long.

Giri follows her and she avoids looking at him. No, not because of the guilt. His broken, bloodied face is just too gruesome to look at.

“You weren’t lying,” he says simply. When she doesn’t react, he tilts his head and she feels his gaze on her, very intent.  “Why me? You could have told anybody, why me? I thought we were friends.”

She focuses on the other people, watches their expressions and clothes, but realises he won’t give up without an answer. They never do. Sakshi walks out and does not stop until she reaches her car.

“I eventually will have to do this to other people. It was nothing personal.”

“I thought we were friends.”

She looks at the broken watch on his wrist instead of his face. “I will apologise if that’s what you want.”

“Do you feel guilty?”

He takes a step back. “Then I don’t want your apology.” Sakshi shrugs. Giri looks around, probably at the others, she doesn’t want to know. She stopped looking at them a long time ago. “Who are all those people?”

She doesn’t reply, she only sighs. She hears his gasp of realisation.

“Are these the other people you have…”

“Yes. Some by accident, some on purpose like you.”

“Are they always around you?”

“Always. And now you will be too.”