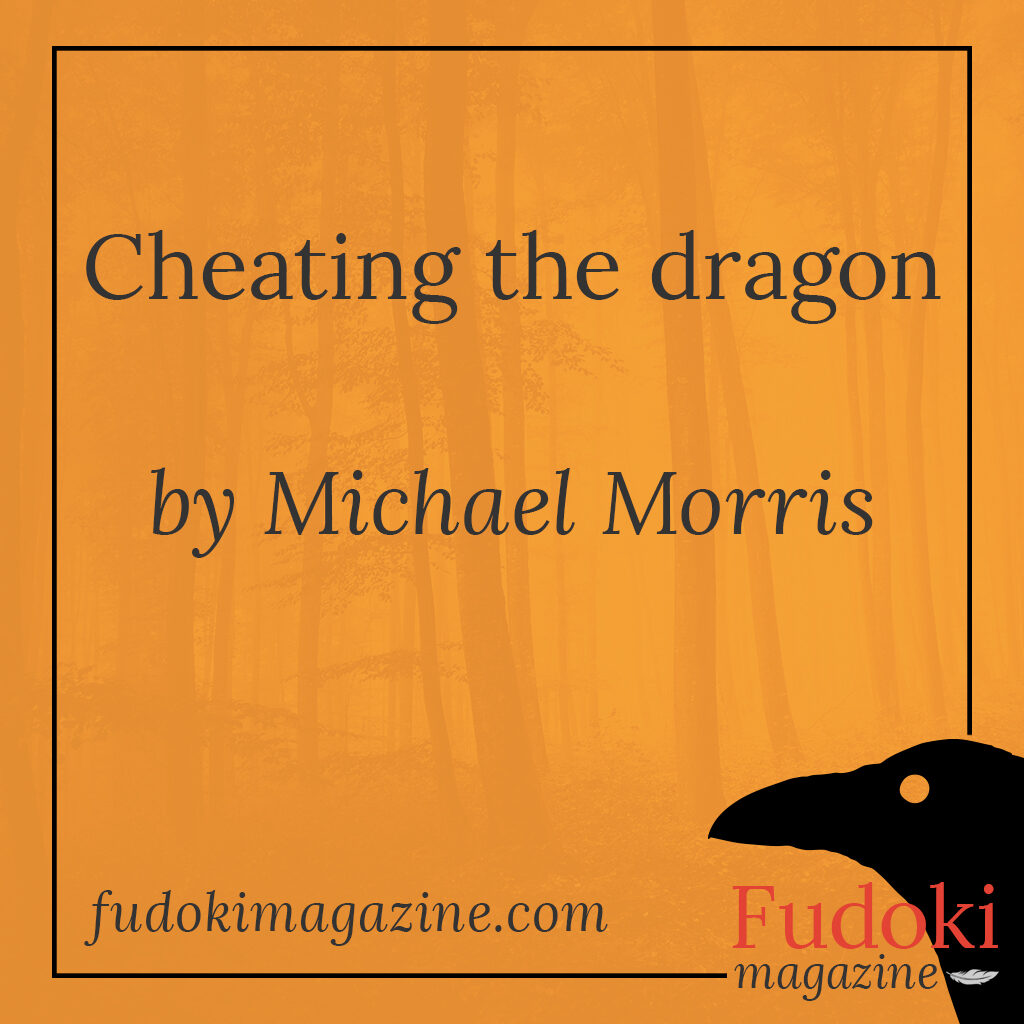 Unlike the fire-breathing reptiles of Christendom, not all dragons of the Middle Kingdom were evil.  They were guardians of the rulers and took on the spirit of the age.

Some ages were benevolent. Education and culture for all who desired, marvellous scientific discoveries, and rice in every bowl.  Others were harsh.  Little girls’ feet bashed with stones, animals eviscerated in the market, and the hungry begging on the street.

Through all these dynasties the dragons co-existed and strove with the rulers.   Until humans gained control over nature and saw little need for their sinuous guardians. The people remembered the dragons through their dances, but nobody believed in them anymore.

Old Wang knew better. Born in a less benevolent dynasty, his wife had perished in a re-education camp.  A Dragon claimed his daughter, soon after her husband left her. Old Wang was left alone to look after his grand-daughter, Meiling.

This story begins one winter morning. Wang opens his eyes, still half asleep.

Not for long. He runs out of bed and rushes to the window.  Wang draws the curtains, wincing from the light.

There is no doubt about it.  The sky is a brilliant blue, and the sun a fierce yellow orb.  The northerly wind howls along the dusty streets, cutting like shards of ice, but Wang knows if they wrap up warm it won’t hurt them.

“The wind spirits are not our enemies.  They keep the Dragon at bay,” he says to himself.

Wang moves into Meiling’s room, opens her curtains and gently rocks her.

Meiling rubs the sleep from her eyes, then jerks away from the glare.

“The Dragon …” she murmurs.

The picnic lunch is already packed.  They bundle on their clothes; mittens, thick socks, windbreakers, woolly hats.  Old Wang holds on to Meiling’s hand as they skip up the path, scuffing the dead leaves that blow in the wind.

The park is crowded.  The young men from the Kung Fu school are sparring in pairs. They are wearing thin cotton uniforms, seemingly impervious to the cold.  Around them old men squat and chat, one eye on the fighters, the other on their games of xiangqi. Many greet Old Wang as he passes, and he exchanges a few words.

The pair walk on.  Wang sees the faded posters exhorting vigilance against foreign enemies.  There is a picture of a scowling Japanese soldier with a bayonet, and a statue of the Glorious Leader with his customary enigmatic smile.

Wang shakes his fist at the stone image.

“Distractions,” he says.  “We are at peace with the Rising Sun.  The enemy within is far more deadly.”

Wang’s eyes fill with tears. Floating behind them is an image of Meiling’s mother, coughing up blood in the hospital, just before she died.

Wang smiles through his tears.  “I’m all right now, little one,” he says.  “Let’s have our picnic.  Then you can play hide and seek in the trees.”

They eat their picnic in the sun, the camellias providing shelter from the wind.  Meiling finds some children her own age.  The children play and climb the trees, laughing and squealing, while Wang looks on and chats to the grown-ups.

The sun starts to sink.  The wind drops.

“Time to go”.  Wang takes Meiling’s hand for the walk back.  Meiling is happy but tired, her feet dragging the last few steps.

Wang carries Meiling up the stairs in the ageing apartment building, closes the door, checks the seal and turns on the filter.  Just in time.  As Wang looks towards the darkening sky, he sees the sinuous plumes reform themselves as they snake upwards from the factory chimneys.

Wang cooks the meal, runs Meiling’s bath, reads her a story and tucks her into bed.

While Meiling sleeps, Wang stares at the city below.  The cars honking, flares blazing, factories clanging. The slow creeping smog smudges the lights.

“Dragon, I hate you!” he cries.  “You took my daughter.  Your ruler took my wife.  But we cheated you this time.  You’re not taking Meiling!”

The Dragon seems to whisper back, its voice in the tendrils of soot probing the window seals.