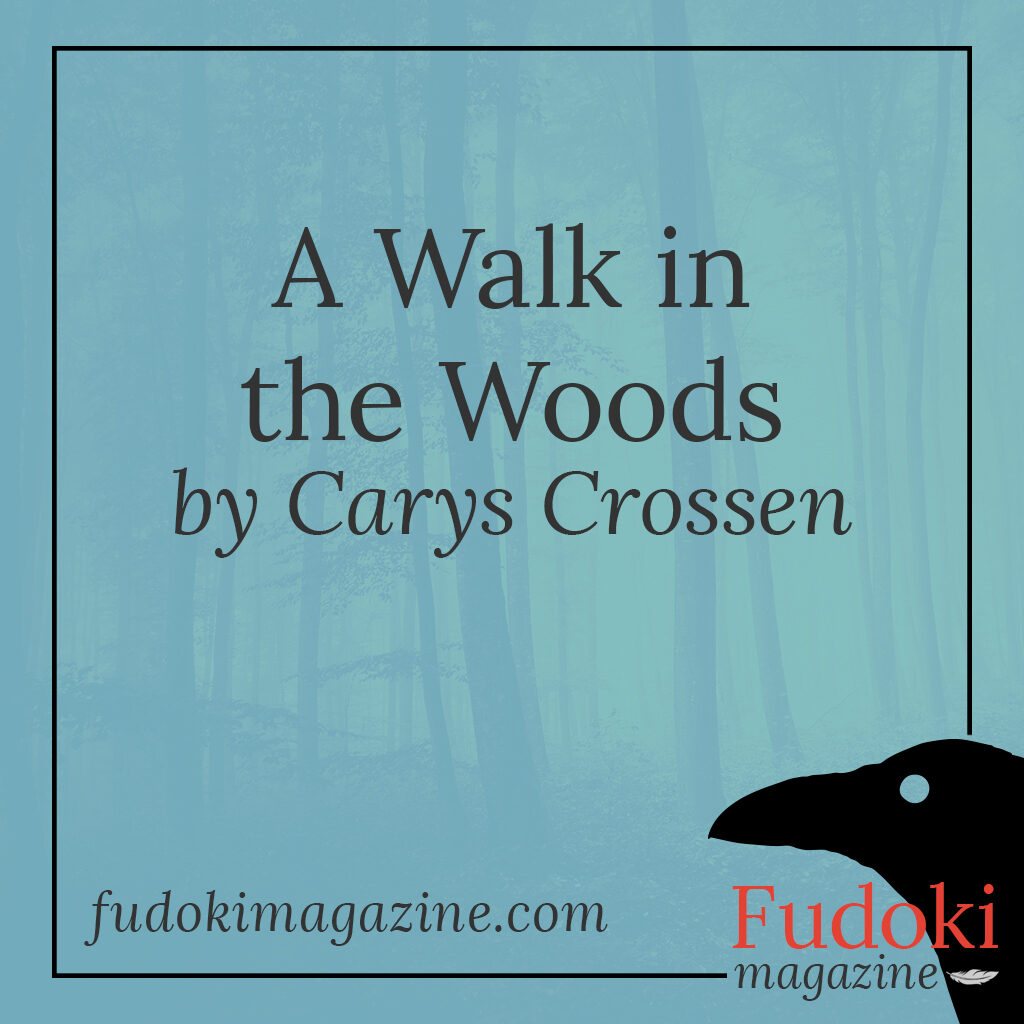 I went into the woods to meet a wolf.

It was a stupid thing to do. Everyone I knew, from my elderly neighbours to the schoolgirls who hung around the street corner, had cautioned me against it. You might meet a wolf, they said. Wolves were treacherous, murderous, they all said. They did terrible things to innocent women (specifics were never given).

But I was so bored with life in my little town, I thought it must be worth the risk. Anything would be better than the Sisyphean round of bus, work, bus, dinner, binge-watching the latest show, sleep, repeat. Endless office politics at the call-centre, interspersed with getting screamed at by customers. Never getting a seat on the bus (apart from the memorable morning I sat on the teenager sprawled across two seats). Nowhere to go, nothing to do, other than going to the shops and spending money I didn’t have on things I didn’t need or want.

So, I went into the woods. To find out whether the wolves were as fearsome as everyone said.

I was nervous, but not frightened. All the pictures I had seen of wolves, no matter how large their fangs (some exaggerated to the size of walrus tusks), no matter how yellowly evil their hides, had been able to hide their beauty, their strength. Their fearlessness. I wanted to see a wolf – but more, I wanted to be a wolf, in some uncanny way. I wanted what they had.

I walked the earthy paths, hopping over tree roots, until the sun had rolled over its highpoint and was careering towards the horizon. But there wasn’t as much as a flicker of silver fur or tell-tale pawprint to be found.

Finally, I met a man. I thought he was a woodcutter at first – who else would have business so deep in the woods? Besides, none of the men from my town would go so deep in the woods, no matter how much they bragged about their toughness and their daring.

But then I noticed he carried no axe, and that he was dressed all in green. Green shirt, green trousers and coat, even green boots. Shades of moss and nettle and sage, except for a few streaks of brown where earth smudged his garments. His hair was rimed with moss, crowned with nettles and thistles and oak and elder. Even his skin had a greenish tint, but it was only when I saw his eyes – green as grass, as sage, as pondweed – that I realised who he was.

‘Good afternoon, sir,’ I said to him, already turning to go back the way I had come.

‘What are you doing in the woods, miss?’ he asked, pinioning me to the path as if I were a butterfly on a card.

‘Looking for wolves,’ I answered. I had no time to think of a convincing lie. I expected surprise or scornful laughter in return. But he only shook his head, sadness curving the lines of his shoulders earthwards.

‘All fled, miss. They’re afraid of humans now, you’ve killed so many. A shame. I loved the lullabies they sang to the moon.’

‘Then why do they always warn us about them?’ I demanded, my heart cringing with disappointment.

‘To keep women out of the woods. Women who go into the woods learn and do funny things,’ the Green Man said. ‘Such as where the wolves might have fled to.’

He winked and strode on. I tried to follow, but he flickered out of view in a trice.

So, I had nowhere to go but back home. So I went, to the inevitable scolding and subsequent silent treatment from my family.

Yet, the Green Man’s words remained in my mind. My curiosity had been whetted on the grindstone of his words. What sort of things would I learn in the woods? What would I do that could be considered ‘funny’? (I had the impression he meant funny as in funny-peculiar and strange-indeedy, not ha-ha funny. Though perhaps he meant both).

My desire was too strong to be restrained, even if I was minded to (I wasn’t). I went back to the woods the very next day, and all the days after.

And was the Green Man right?

I’ve learned many things in the woods. And done many strange things too, and I have regretted none of them. But I can see you wondering: did I find out where the wolves had gone?

I did find out.

And where did the wolves go, you want to know?

Go into the woods, my dear, and find out for yourself.