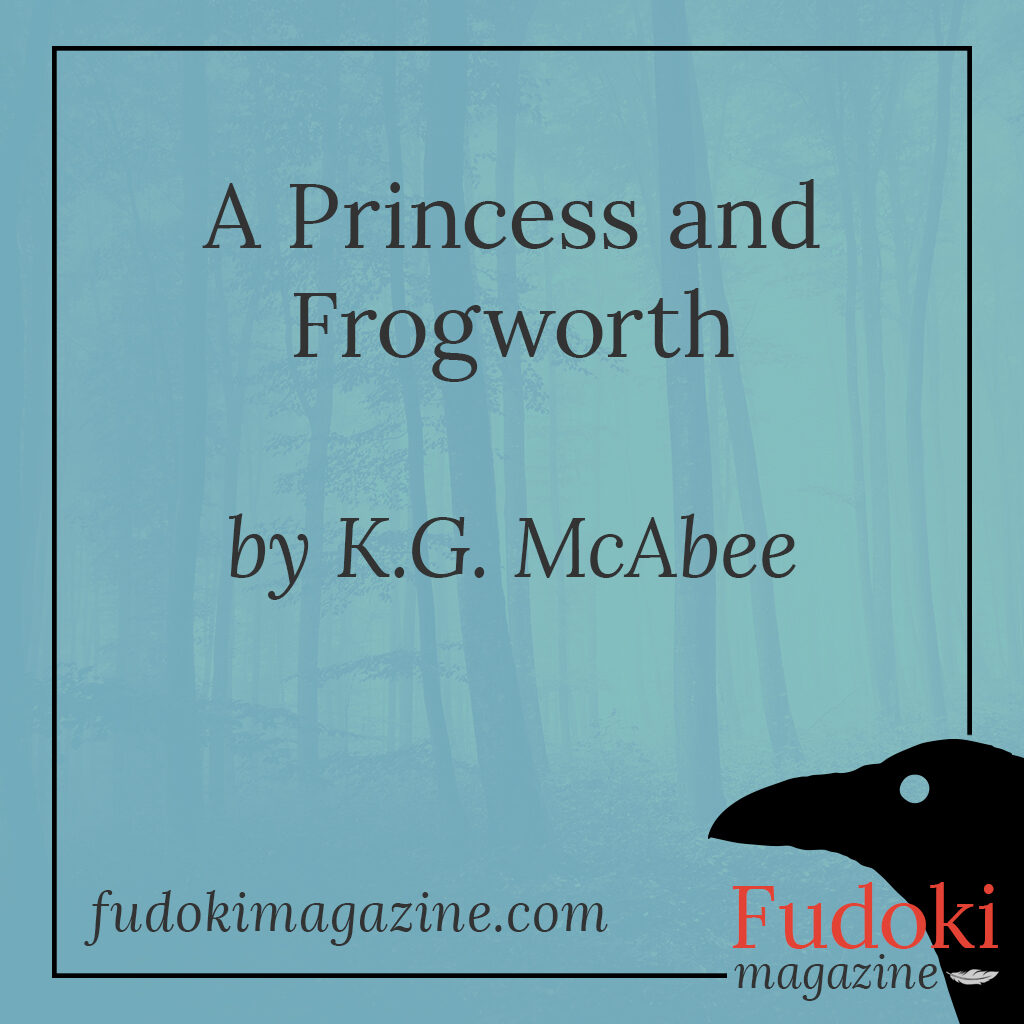 Frogworth the frog sat on a lily pad near the edge of his pond. It was a quiet day and just a bit boring.

The lily pad shook. He opened one eye to see a small turtle sticking a head up on the other end.

‘Thought I’d best come warn you. Looks like that bucket over there has decided to take a swim.’ The turtle pointed with one claw

Frogworth looked towards the shore. Sure enough, an upside-down wooden bucket was bobbing its way towards his lily pad.

Suddenly the bucket leaped into the air. Beneath it was a grinning head covered in brown curls. A silver crown tilted over one green eye.

‘Oh, yeah,’ said the princess. ‘Guess I should have thought to leave it at home. But don’t you like my invention? See, it’s tied to my arm and it’s got a hole in it to see through. I sneaked up on you. Stealth mode!’ She stood up, weeds streaming from her soaked clothes. The water only came up a little past her waist. ‘And it got me close enough to do…this!’ She grabbed Frogworth.

Or where Frogworth had been half a second before.

Now he was three lily pads to the left.

‘Drat!’ yelled the princess. ‘Hold still, you!’ She lunged and just missed grabbing him again.

‘You do realize frogs can jump, right?’ said Frogworth. He was now more than ten feet away, closer to the middle of the pond.

The princess surged through the murky water, her bucket floating behind her like a leashed dog.

‘Would you hold still?’ yelled the princess, slapping the top of the water in frustration. It didn’t help her mood when water splashed into her eyes.

‘Why should I?’ asked Frogworth.

‘Kiss me?’ Frogworth slid back a bit on the big pad. ‘Why would I want…I mean, why would you want to kiss me? We’re not even the same. You’re a human and I am—’

‘You are an am-phib-i-an,’ the princess said.

‘I’m impressed,’ said Frogworth, his eyes widening. ‘Not many princesses know that.’

‘Just because I’m a princess doesn’t mean I just sit around and play my lute. I’m very smart, I’ll have you know! My mother the queen buys me all the books I want. My father the king is giving me fencing lessons.’

‘You’re putting a fence up around your castle?’ asked Frogworth. ‘Chain link or wood?’

‘No,’ said the princess. ‘Fencing like with swords and stuff.’

‘Right. Well, I didn’t mean to suggest you were stupid but, not to be personal, you did just think you could sneak up on me wearing a bucket on your head.’

The princess’ wet face turned red. She waved away an irritating dragonfly flitting around her eyes. ‘I. Am. Going. To. Kiss. You.’

‘Seriously,’ said Frogworth. ‘What’s this about?’

‘If you must know, a princess friend wrote that she kissed a frog and he turned into a handsome prince. I’m a princess. You’re a frog. You do the math.’

The princess came closer. And closer.

Frogworth opened his eyes wide. And, since frogs have very big eyes, that was very wide indeed. ‘Answer me this, will you? Why in the world would I want to be a prince, handsome or otherwise? Can a prince jump twenty to thirty times his body length? Does a prince have lovely green skin with bumps? Does a prince have a mouth that’s half the size of his head? Can a prince do this?’ Frogworth shot out his tongue. The tip wrapped around the dragonfly that had been buzzing the princess. It disappeared into Frogworth’s mouth.

‘Well, no.’ The princess looked impressed. ‘You do have a point. Maybe I need to rethink—’ She flung herself forward onto one side of the big lily pad.

Lily pads can hold any number of frogs and turtles.

But a princess is quite another thing.

The pad flipped over.

The princess disappeared under the water.

Frogworth was already safe on another pad in less time than it takes to tell of it.

The princess wasn’t so lucky. She was in water over her head and trapped underneath a very large lily pad. Every time she managed to kick off from the bottom of the pond and come up, she bumped her head on the bottom of the lily pad. And the bucket, still tied to her arm, was full of water and kept dragging her back down.

At once, about fifty frog-heads appeared above water. They gathered around one side of the upside-down lily pad. Three huge turtles joined them, grabbing the edge of the lily pad in their mouths. A few seconds later and they’d pulled it away.

A head poked above the surface. Weeds covered the brown curls but, amazingly, the silver crown was still there, though it was now coated with mud.

An enormous turtle paddled up close and said, ‘Hang on, princess.’ It dragged her to the shore.

She sat in the mud, gasping until she caught her breath. Then she untied the string around her arm and pulled her bucket up beside her.

Frogworth hopped to a closer lily pad. ‘Are you all right?’

‘I hope you’ve forgotten this frog-kissing idea.’ Frogworth stuck his tongue out and licked his eye. He thought about mentioning he’d like to see a prince do that, but decided not to.

‘I guess so,’ she said. Then she grinned. ‘For today. But someday…’

She emptied her bucket began to trudge towards her castle.

Looked like things around the pond were going to be a lot more interesting, thought Frogworth.

2 thoughts on
“A Princess and Frogworth”

Leave a Reply to Walter A Hutcherson Cancel reply