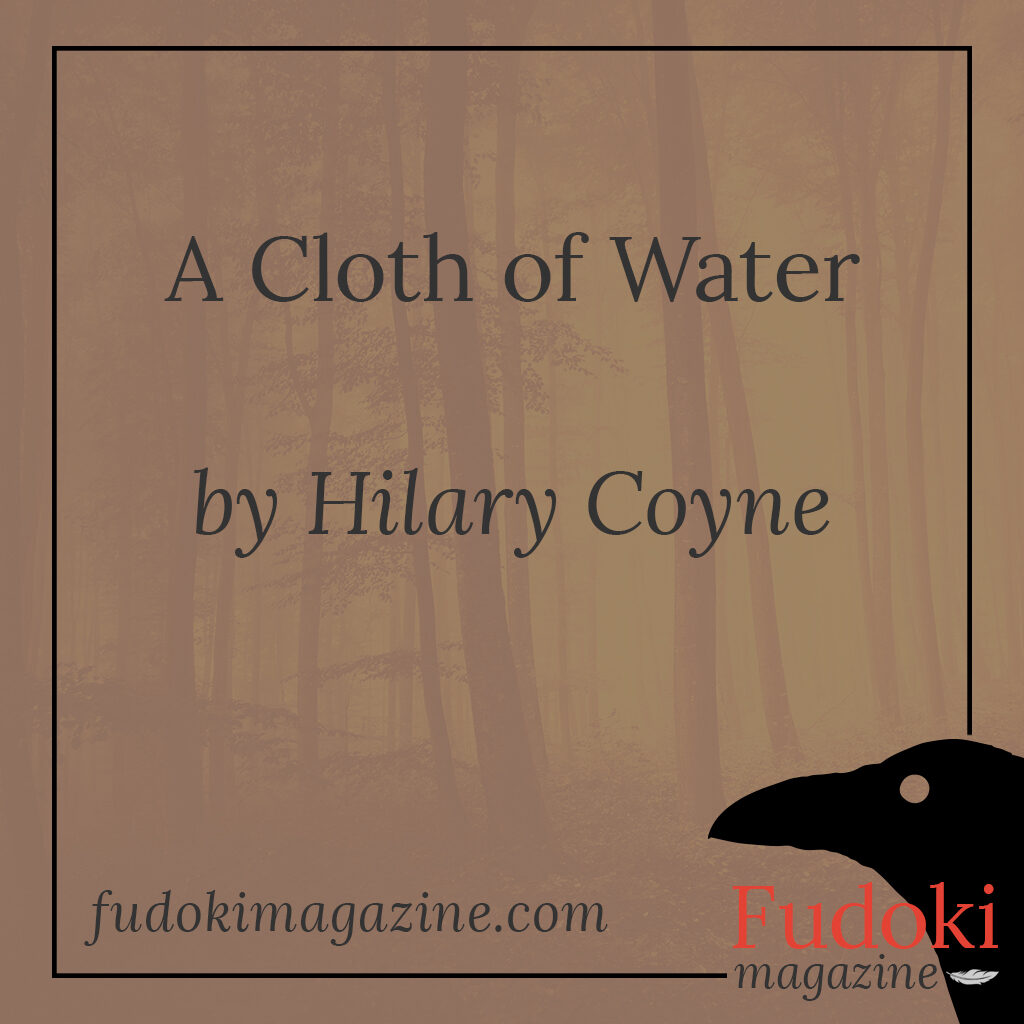 There is a boathouse hidden among reeds at the edge of the loch where the moor comes down to meet the water’s edge. A woman lives there. A mother.

The woman sits in the boathouse and watches the reflected light bounce off the jars of water. There are hundreds of them clustered on the shelves which line the walls. A life’s work. Penance for a long-ago act. In front of her stands a loom which holds a cloth of silver and blue and green and grey. It shimmers as she weaves – a dragonfly’s wing, a pearl’s mother, heat on the path where it curves over the horizon. A thread, like a spider’s gossamer, trails from the open jar at her feet to the loom. She is weaving a cloth of water. Of all the waters in the land.

The woman has lost count of how long she has lived here. It is a liminal existence, neither on land nor on water. The boathouse rests above the loch on four thick legs. Its wood has weathered and silvered with time. Viewed from the top of the hill above the moor it blends with the water to a mercurial mirage of solid on liquid. No-one knows it is there and those who might have remembered are long dead. Inside, the woman dwells on the narrow walkway of boards that overlooks the water. There is no boat and the loch doors are never opened. She leaves only at night to relieve herself and forage on the bare moorland and among the tangled reeds on the water’s edge. She never eats from the loch itself. When the water level is low enough she can see a wedge of reflected sky at the edges of the boathouse. Occasionally a bird’s mirrored image flits across and she thinks of the life she once had.

The woman weaves every day from first light till the gloaming. Once a month the pains come, not as before with her courses but sharper and more unsettling. She is too old now for this monthly cycle but still it comes in a reminder of what once was and what might have been. For two days she cannot weave. Her sleep is filled with night terrors and fevers and her days with a dragging lethargy. On the third day, he comes.

He brings water. Of every clarity and consistency from all the rivers, and lochs, and burns in his dominion. Sometimes he brings the brackish water of mud flats in an estuary, or the clear, sweet water from a mountain stream, other times he delivers storm-hued water with the deep salty tang of open sea. He arrives by night and by the loch, slipping into the boathouse and waiting still and quiet as a moored craft for her to wake. His presence always shocks her even though she knows her sweats and nightmares herald his arrival with the moon.

When the dreams release her to the day, they eye each other warily, looking for signs of something lost, something relinquished long ago. She has got used to his form and what others would call monstrous no longer frightens her. After all, this is her doing.

No more than a child herself, she had left him at the water’s edge. It was to have been an end but the each-uisge, the malevolent water horses of the loch, claimed him as their own. People misunderstood, said he was lost, tried to console. But they were wrong and she did not deserve their pity. She gave him up, not easily, but of her own volition. Her son.

He inspects her progress with great attentiveness each time he comes, his only commentary the snorts and watery echoes of his adoptive kind. At first, after she had mastered the weave she believed would be impossible, she thought this was atonement. An act of purpose and of good for the wrong of her frightened youth. She worked diligently, looking ahead to the day when she would be finished and released.

As the years passed and she grew older, she realised that this was no atonement but punishment. The cloth charts the infinite flow of human suffering and experience. The woven fabric pools at her feet and, as its folds grow heavy, it drops down and spreads out across the surface of the loch. Waste, blood, and tears trickle eventually into the waters of the land and it is this that he brings to her each month. With each passage of her shuttle the woman endures the endless pains and struggles of existence. The cloth of water will never be finished and her labour never complete. This is her penance.

There is a boathouse hidden among reeds at the edge of the loch where the moor comes down to meet the water’s edge. An old woman lives there. There is no word for a mother who has lost her child.